What's In The Budget Deal Congress Passed To Reopen The Government? 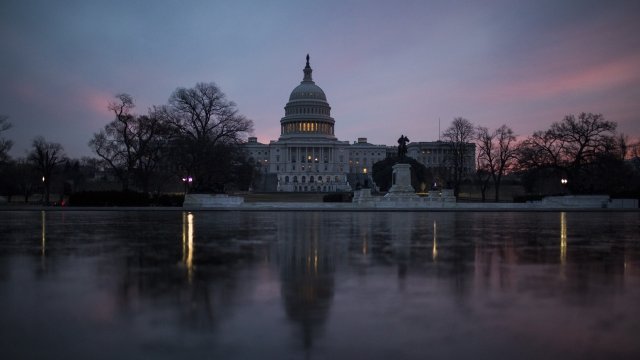 SMS
What's In The Budget Deal Congress Passed To Reopen The Government?
By Katherine Biek
By Katherine Biek
February 9, 2018
The expensive budget deal will keep the government funded through March 23 as lawmakers work on long-term funding plan.
SHOW TRANSCRIPT

Many eyes were on Congress early Friday morning as it passed an expensive two-year budget deal to reopen the government, which shut down for a few hours overnight.

So what exactly is in that deal? It increases military and nondefense spending by nearly $300 billion over the next two years.

It sets aside almost $90 billion in disaster relief aid for states and territories struck by wildfires or hurricanes last year. And it raises the debt ceiling.

But Congress agreed to fund the government only through March 23. So lawmakers have six weeks to write a long-term funding package that fits into the two-year framework that's already approved.

One thing the new deal doesn't address is the Deferred Action for Childhood Arrivals program, or DACA, which is set to expire in early March.

Senate Majority Leader Mitch McConnell previously promised to address DACA later this month if an agreement on legislation wasn't made by Feb. 8.

He kept his word Friday morning, scheduling a procedural vote for Monday that will let the Senate to start debating immigration legislation. Earlier this week, House Speaker Paul Ryan said he'll bring a DACA solution to the House floor, but he hasn't specified which bill that would be.