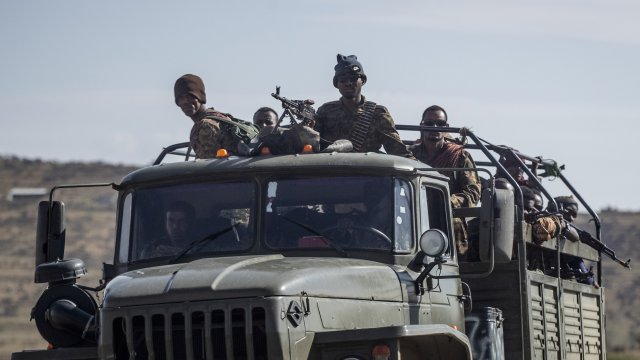 SMS
What's Happening In Tigray?
By Newsy Staff
By Newsy Staff
December 30, 2021
The Ethiopian government has been fighting the Tigray rebels since last November when the TPLF attacked government bases.
SHOW TRANSCRIPT

It’s a military conflict that's turned into a humanitarian crisis – now with some new developments.

Newsy's Bellingcat series, in partnership with the BBC, helped put an international spotlight on Ethiopia's civil war this past spring. The investigation, using satellite imagery, landscape mapping, and videos posted to social media, revealed details of a civilian massacre in Ethiopia, with Ethiopia’s military as its main suspect.

And recent days have seen some major shifts in this ongoing civil war.

After approaching Ethiopia's capital in November, rebel fighters from the nation's northern Tigray region have now turned around and withdrawn their forces.

It’s a chance for peace - or at least for both sides to start talking again.

The top diplomat at the United Nations, Secretary General António Guterres, urged the warring parties to "grasp this moment" and put an end to the year-long conflict so humanitarian assistance can finally make its way to those who need it.

The Ethiopian government, led by Prime Minister Abiy Ahmed, has been fighting the Tigray rebels since last November when the Tigray People’s Liberation Front, or TPLF, attacked government bases after months of growing tension. The government responded by declaring an offensive in Tigray.

Ethiopian government forces started out strong, initially taking control of the main urban areas of the Tigray region before being forced to withdraw.

Now, the tables have turned again, but this time it's the TPLF withdrawing.

And one thing that helped the government regain the upper hand was foreign drones.

An August repor from our partners at the investigative group Bellingcat used open-source visuals to determine that it was likely Ethiopia was using Iranian-made drones. There’s also evidence that Ethiopia is using Chinese-made drones.

The leader of Tigray’s forces specifically called out the Ethiopian government’s use of drones in his letter to the United Nations proclaiming the withdrawal.

While the conflict has dragged on, claims of human rights abuses and war crimes have piled up.

Working with BBC Africa Eye and Bellingcat last April, Newsy’s investigation showed the killing of unarmed villagers in Tigray by what were likely Ethiopian government forces. There have been many more reports of human rights abuses since then.

According to the United Nations, at least 2 million people across northern Ethiopia have been displaced because of the conflict. More than 9.4 million people are suffering from acute food insecurity.

The situation is dire but there may be an opening with the TPLF's withdrawal. Ethiopia’s government said it will not enter the Tigray region.