What's Driving U.S. Ebola Fear, And How Afraid Are We? 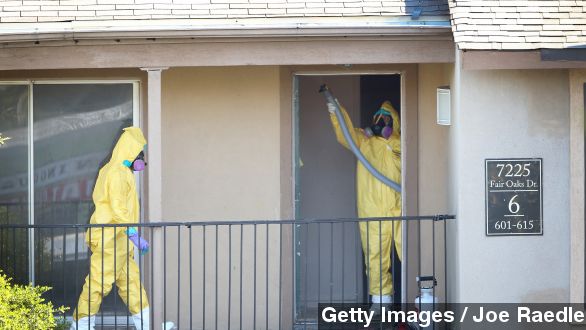 SMS
What's Driving U.S. Ebola Fear, And How Afraid Are We?

By Steven Sparkman
October 9, 2014
U.S. media implies Americans are panicked over Ebola, but the majority aren't worried and what fear there is stems from distrust of the health system.
SHOW TRANSCRIPT

For weeks, we've been seeing frightening headlines about Ebola panic in the U.S.

FOX NEWS: "Fears of an Ebola outbreak stirring panic across the country."

And also no end of articles trying to calm people down, telling us not to worry.

So with all the mixed messages saying "panic" and "don't panic" and "you're already panicking," it's worth taking a look at how scared Americans actually are of an Ebola outbreak and what might be driving it.

A poll this week from the Pew Research Center found around one in three Americans are worried they or one of their family members will be exposed to the virus, with 11 percent saying they were "very worried."

That means most Americans aren't as scared as media reports might imply they are. And you could argue they're actually less scared than before the U.S. got its first Ebola case.

A late August poll from the Harvard School of Public Health found nearly 40 percent of Americans were concerned about a large outbreak in the U.S.

Those pollsters found one of the main drivers of that fear was the widespread belief that Ebola spreads easily. It shouldn't be any surprise, then, that health officials have been relentlessly targeting that misconception ever since the Dallas case first came to light.

THE WHITE HOUSE: "The nature of the Ebola virus itself, which is difficult to transmit…"

C-SPAN: "The spread is nowhere near as contagious as measles or TB or the common cold."

But, of course, it's still possible to understand Ebola and also be frightened of it.

For instance, airport workers in New York carried out a 24-hour strike this week saying their working conditions put them at risk of contracting the disease.

"We encounter human feces, sometimes blood, most of the time vomit. … We don't get the right sanitary equipment to deal with it. We work with short-sleeved shirts."

And then there's the Spanish nurse who caught the virus while treating a patient. She was infected despite wearing protective gear.

But either way, it's clear: lapses can and do happen, even with modern protective gear.

C-SPAN: "If you take it off and don't do it carefully, you might contaminate yourself by mistake."

A recent poll by a nursing union found as many of 80 percent of U.S. nurses say they haven't been trained in how to handle Ebola patients, and those outside the healthcare industry, like the men who cleaned the Dallas Ebola patient's vomit off a sidewalk, may not even have safety equipment or know how to use it.

The CDC says no special precautions are necessary beyond standard infectious disease protocols, but those have to be followed to be effective.

Which leads us back to the Dallas case. You've probably heard how Thomas Duncan was originally sent home from the hospital when he went to the emergency room the first time — despite the fact the hospital knew he had been to Liberia.

Texas Health Presbyterian originally blamed a flaw in its electronic records program for the oversight but later retracted that, saying, for whatever reason, hospital staff just didn't believe Duncan had Ebola.

All of this suggests what Americans need to hear now is what hospitals around the country are doing to make sure the next patient isn't sent home and that all hospital staff know how to protect themselves.