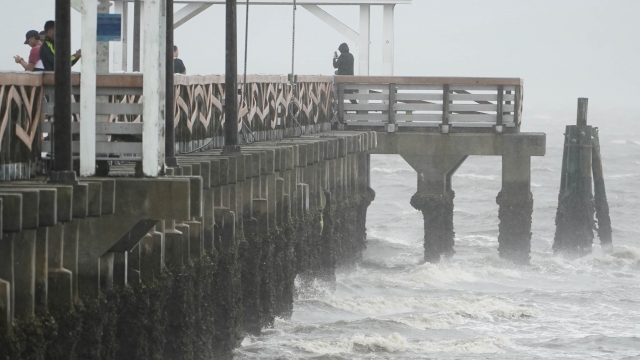 SMS
What's Changed Since Tampa's Last Big Hurricane 100 Years Ago
By Haley Bull
By Haley Bull
September 28, 2022
Though Tampa, Florida has struggled with past storms, one historian says it's now better prepared ahead of Hurricane Ian.

The state of Florida is right in Hurricane Ian's path.

Southwest Florida saw landfall and heavier damage, and the Tampa Bay region braced for what was expected to be a 100-year storm for the area, but it avoided the direct hit initially prepared for.

The region dealt with the impact of winds and rain, and saw water pulled out from the bay.

Historian Rodney Kite-Powell decided to ride it out in his Tampa bungalow once the storm track updated.

"It was here and presumably survived the 1921 hurricane, that was the last time Tampa was directly hit," Kite-Powell said.

"Every building was either damaged or destroyed," he said. "There really weren't a lot of people here, 800 or so."

The storm in 1921 left flooding throughout the area, seen through photos from the Tampa Bay History Center.

"So again, not a whole lot of loss of life, fortunately," Kite-Powell said. "But again, seeing the power of that storm — a small storm by comparison really — you see those pictures, it really makes you see the power of these these hurricanes."

It was a different time, when there wasn't the same population density, infrastructure, power grid or forecasting. Today, Florida is developing as one of the fastest growing states in the country. But as with any major storm, there's concern for catastrophic economic impact.

John Quelch is the dean of the University of Miami Herbert Business School. He discussed the potential for economic damage.

"It's too early to see where Ian is going to fall, but I would expect to see it around or above where Irma ended up at $52 billion," Quelch said. "Preventive measures have definitely improved. I think in the case for this particular storm, there were enough warnings in place that the emergency services have been able to position themselves effectively to do their absolute best to mitigate against catastrophic damage and loss of life."

Quelch explains things like the height of the storm surge, miles of coastline impacted, location of landfall, the speed of the storm and rainfall totals can all be considerations. Damage assessments typically include property damage, business disruption and the supply chain.

"There are about 4,500 factories within the path of the hurricane as it moves on shore," Quelch said.

While this hurricane hits the state and the impact becomes more clear, Kite-Powell isn't letting his guard down.