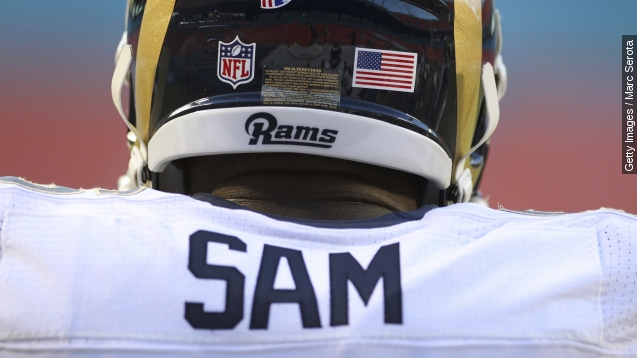 SMS
What's Changed After Michael Sam's Coming Out?
By Eugene Daniels
By Eugene Daniels
October 10, 2015
Michael Sam thinks if he hadn't come out, he'd still be in the NFL; there's no way to prove that, but his post-coming out career hasn't gone smoothly.
SHOW TRANSCRIPT

— changed Michael Sam’s life — and after he was drafted, the world of football.

After coming out, Sam got some serious spotlight off the field. (Video via OWN)

"Being GQ man of the year is a great honor and a great privilege," Sam told GQ in 2014.

Though Sam became part of pop culture and sports history, his professional football career hasn't taken off despite an impressive resume playing for the University of Missouri. (Video via Visa)

And Sam has made it pretty clear that he thinks he would still be in the NFL if he didn't come out before being drafted. (Video via ESPN)

"It probably would’ve been better if I didn’t come out, I’d be on a roster," Sam said recently on "The Dan Patrick Show."

It's tough to say definitively, though. For one, Outsports' co-founder wrote NFL scouts and national media were asking enough questions that Sam made his announcement earlier than intended, feeling the news would inevitably get out with or without his consent. Also Sam's been generally regarded as a speedy, but undersized prospect with an uncertain role in the NFL.

There’s no way to prove any homophobia from teams Sam has played for or teams that have passed on signing him, but it is clear that his career took a much more negative turn after coming out compared to someone like Robbie Rogers, soccer’s first out active player.

"For the past 25 years, I've been afraid to show whom I really was because of fear. Fear that judgment and rejection would hold me back from my dreams and aspirations," Rogers told ABC.

After coming out, Rogers was picked up by the L.A. Galaxy and has seemingly been able to distance his sexuality from his athletic ability. Something, it seems, Sam hasn’t been able to do.

While Sam embracing his full self publicly may not have helped his career, he’s been able to use his experiences to inspire underprivileged children to be themselves. In one way, with T-shirts that say "great things can happen when you have the courage to be yourself." (Video via Coca-Cola Co.)