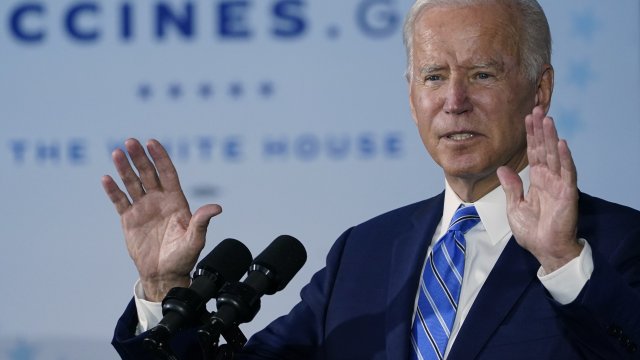 From a deadly withdrawal out of Afghanistan to inflation and a stalled agenda in Congress — the past three months have taken a significant political toll on President Biden.

The slide began in early August, with his approval rating dipping below the all-important 50% mark as the Taliban retook Afghanistan.

With an approval rating now in the mid-40s, the president's support at this point in office is lower than all other recent presidents except Donald Trump.

But according to some Democrats, one issue sits above them all.

"Voters voted for him for one reason, which was to defeat COVID," said Democratic strategist Simon Rosenberg. "And earlier this year, in the spring, when COVID was being defeated, his numbers went way up. And then when COVID started defeating him, his numbers came way down. It's, frankly, very simple in many ways."

Rosenberg says recent crises at home and abroad have many Americans feeling the president has been distracted from dealing with the pandemic — concerns he has shared directly with the White House.

"We don't get too glum around here," said White House press secretary Jen Psaki. "Even if things look challenging, our view and his view is that he was elected to continue to press forward and address the challenges the American people are facing."

White House aides maintain the president has never taken his eye off COVID and point to a number of encouraging signs, including the nearly 77% of the country 12 and older with at least one dose of the vaccine. But rollout of the president's priorities — like booster shots — has been bumpy.

They are also hopeful another major victory is on the way as Congress debates a bipartisan infrastructure bill and major parts of President Biden's agenda.

And with the midterms still over a year away, Democrats are hopeful there is plenty of time to turn things around.