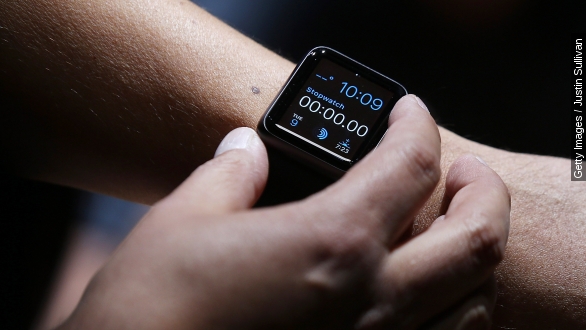 SMS
What's Behind Apple's Launch Strategy For Watch?
By Ben Lawson
By Ben Lawson
April 24, 2015
Apple changed up it's launch strategy for Watch, showing that it views the device differently than its other products.
SHOW TRANSCRIPT

The first shipments of the Apple Watch went out Friday and for an Apple device, the rollout was pretty low key.

Well, the first shipments went out Friday if you were one of the lucky ones that placed a pre-order before Apple's stock ran out. Apple has had to delay a lot of orders while it replenishes its inventory.

And the company doesn't seem to be sweating it. In fact, Apple has done pretty much everything it can to make the Watch's launch as subtle as possible and it seems pretty content to let the device slowly leak onto the market.

Apple has seen huge success with its hectic launch days in the past, but all the crowds of anticipated customers typically present for an iPhone release are nowhere to be found for Watch.

Instead, the company made the products available online only and allowed interested customers to set up appointments to go into an Apple Store and try out the device before buying.

So what does this shift in strategy mean for Watch? Well, Apple doesn't seem to be targeting as broad an audience with the new device as it has with other products.

Maybe Apple isn't aiming for the Watch to be the ubiquitous consumer product the iPhone and iPad are, and is instead targeting more of a luxury market.

You can just look at the price tag for the different versions of the device for that. There probably aren't as many people willing to shell out that kind of cash, especially considering the Watch has been billed as primarily an iPhone extension.

And instead of going for a wide roll out in retail stores, Apple made the device available in just six boutique stores around the globe.

Judging from this latest rollout, Apple is aiming for the same exclusivity they achieve with most of their products but in a more controlled and more upscale manner.