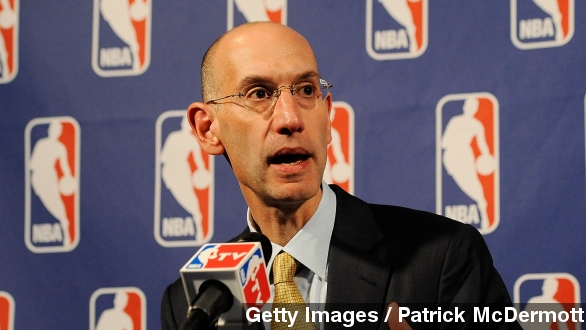 "Out of the underground and into the sunlight" — that's the trajectory NBA Commissioner Adam Silver urged for sports betting in an op-ed earlier this month.

He made the argument in The New York Times, arguing for regulation and technological safeguards for legal sports betting while also noting an "obvious appetite" for sports gambling among fans.

But now that the commissioner's piece has had a little time to sink in, many are starting to wonder why Silver would come out in favor of sports gambling. And why now? (Video via CNN)

First, there are the reasons Silver himself gave in the op-ed. He pointed out illegal sports gambling is "widespread" in spite of efforts to quash it and urged a federal framework allowing states to legalize betting on professional sports.

He also noted the popularity of sports gambling in other countries, specifically England, where a sports bet can be placed on a smartphone. (Video via Deutsche Welle, Paddy Power)

Then there are the potential reasons that didn't appear in Silver's piece — like earning revenue for the league from sports gambling.

As ESPN writes: "The discussions ultimately will include potential ways to generate revenue through sports betting. Licensing fees and sports book advertising deals, such as the ones European soccer teams embrace, are among the possibilities."

That corresponds with what Silver had to say in a Bleacher Report interview in October. "There's a commercial opportunity as well. ... If you look at, for example, the English Premier League, one of the largest categories for sponsorship are the betting companies."

According to Vice, which did look at the English Premier League, four teams' jerseys will be sponsored by betting companies this season — to the tune of $17.5 million. That's not including a sponsorship from a betting payment processing site and sponsorships for lower-level clubs.

Which, though legal, some see as a form of sports gambling.

As for the timing, Silver argues the advent of sports gambling is inevitable and he wants the league to get out in front of it.