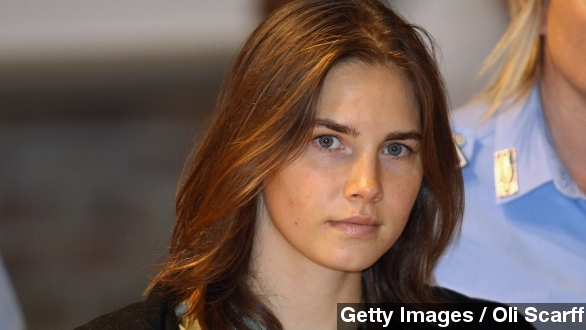 Even though Amanda Knox’s legal case is continuing in Italy, back home in Seattle, she’s moving on with her life.

According to The Seattle Times, Knox is engaged to musician Colin ‘Thunderstrike’ Sutherland. Sutherland reportedly wrote her while she was in an Italian jail and even moved back to Seattle to be with her.

Sutherland and Knox have been seen together as far back as September, 2014 when the two were spotted in Coney Island. (Video via The Johnny Pumps)

Knox has retained a fairly normal life since moving back to the United States following her release from Italian prison in 2011.

She graduated from the University of Washington last year with a degree in creative writing.

From there, she’s retained a job at a bookstore and as a freelance art reporter for The West Seattle Herald.

But her freedom is still in question abroad.

In 2007, while studying abroad for school in Italy, Knox’s roommate, Meredith Kercher was stabbed to death. Knox was arrested in 2007 and indicted on murder charges in 2008.

In 2009, Knox was convicted of murder, but appealed. She won the appeal and was released from prison to return to the U.S. in 2011.

The retrial found her guilty and she was again convicted of the same murder in 2014.

Now, there’s another appeal as well as a legal fight over whether the U.S. should extradite Knox for her to serve her sentence. That case will be heard March 25. (Video via ABC)

The Seattle Times reports no wedding date has been set for Knox and Sutherland.