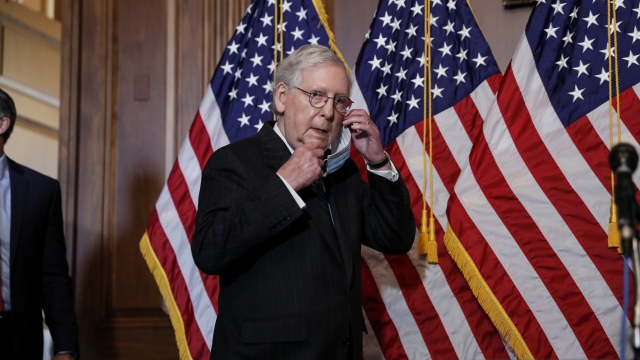 SMS
In U.S. System, Senate Majority Leader 'Really Runs The Show'
By Katherine Biek
By Katherine Biek
January 5, 2021
Results of Georgia's runoff elections on Jan. 5, will determine who will lead the U.S. Senate as majority leader during the 117th Congress.
SHOW TRANSCRIPT

When it comes to D.C. politics, the most powerful figure arguably is not the president -- it's the Senate majority leader.

"The Senate majority leader really runs the show. It's up to the Senate Majority Leader to determine the calendar, what bills are going to be introduced, what bills are going to make it to the floor. … Really, if you're a member of the Senate and you don't have the majority leader on board, you're probably just spinning your wheels introducing a piece of legislation," said Jim Ronan, a political science professor at Villanova University.

McConnell: "Think of me as the Grim Reaper. The guy who is going to make sure that socialism doesn't land on the president's desk."

As part of the "Great Compromise" in 1787, the Founding Fathers created a Senate with equal representation so that the interests of smaller states couldn't be drowned out by those with larger populations.

Unlike the role of House Speaker, the Constitution doesn't mention the office of the Senate majority leader. Instead, it dictated the Senate would be presided over by the vice president.

Eventually, the vice president took more of a back seat, and committee chairs and other senior members began leading the Senate. It took until the 1920s for the roles of majority and minority leader to be officially created.

But the role of majority leader as we know it today is really rooted in 1955, when then-Sen. Lyndon B. Johnson took over the job.

Ronan: "No one wanted the majority leader job. It was a thankless position. It didn't have any power. And Johnson kind of looked at it and said, "I can turn this into something."

Party leaders are picked every two years  — and if members feel their current leader is doing a good job, they'll rarely mount a challenge. McConnell has been leading Senate Republicans for 14 years and counting.

This means he'll remain the majority leader if Republicans still control the Senate after the Georgia runoff elections.

Ronan: "With Biden and McConnell, they are personally very friendly. … But what the Senate majority leader has had to deal with in recent years is party pressure. And I think McConnell and Biden certainly feel that -- McConnell from the Republicans, Biden from the Democrats -- that they may be able to strike some agreements, but they're going to have some party members behind them who may not want to compromise."

But Democrats will take control of the Senate in the case of a 50-50 split, since Vice President-elect Kamala Harris will cast any tie-breaking votes.

The last time the Senate was evenly split was in 2001. But it only lasted a matter of months until Sen. Jim Jeffords left the Republican Party to caucus with the Democrats, giving them full control of the chamber.