What Republicans Are Hoping To Accomplish In Wisconsin 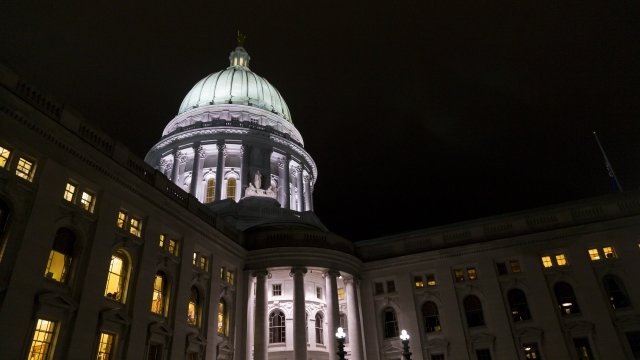 SMS
What Republicans Are Hoping To Accomplish In Wisconsin
By Tom Durian
By Tom Durian
December 5, 2018
WTMJ-TV reporter Tom Durian has the latest on what some critics have called a "power grab" by the Wisconsin GOP.
SHOW TRANSCRIPT

All is quiet here at the Wisconsin State Capitol in Madison — less than 24 hours after a marathon session to push some bills through the legislature in this lame duck session.

Now, Republicans are trying to accomplish two things here. The first is limiting the powers of the the governor-elect and the attorney general-elect. They are really looking to limit the governor's ability to direct the incoming attorney general to withdraw the state from the multi-state lawsuit to repeal the Affordable Care Act by giving that power to the legislature.

Now, the second surrounds the state's Economic Development Council. The head of that agency is usually handpicked by the governor, and the legislation would hand that back over to the legislature for a period of time. This is important because the council was largely involved in the deal to bring electronics manufacturer FoxConn to Wisconsin.

Republicans have heard that this is a power grab but say that it's really a way for them to even the playing field — even though they retain control of both bodies of the legislature here in Wisconsin. They say this gives them a seat at the table.

The Democrats could sue over this. The governor-elect says that they are looking at that as a possibility and everything is on the table. Right now, they're asking the people of Wisconsin to talk to their legislators and also to make their voices heard to current Gov. Scott Walker. They're asking for those who don't want this to get their voices to the governor, hoping that he will not sign the bills.

Gov. Walker is currently out of the state attending President George H.W. Bush's funeral in Washington. He has not said whether or not he will sign these into law.