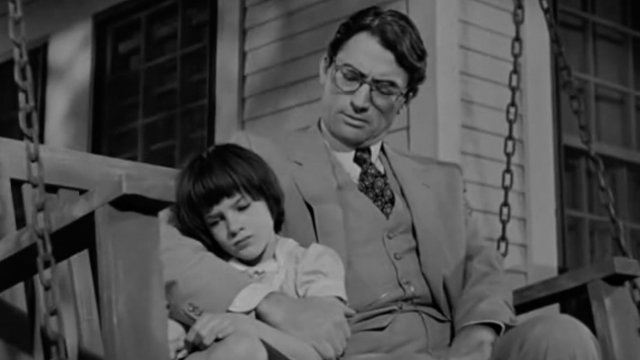 The courtroom is the setting for one of the most memorable scenes in "To Kill a Mockingbird." But some of the most critical conversations about race and class happened on a much smaller platform: a porch.

When Atticus Finch is first assigned the case of Tom Robinson, a black man accused of raping a white woman? That happens on a porch. Atticus imparting lessons to his daughter Scout? Porch. Atticus defending his black client against a lynch mob? Porch.

"The porch is a space, you can see why it would be so enticing for a movie maker, because it's like a stage in real life," said Rachel Watson, an American literature professor at Howard University.

Rachel Watson is an American literature professor at Howard University and somebody who has written about both the book and film versions of "To Kill a Mockingbird."

"I'm certainly a little obsessed, if that qualifies me as an expert!"

She's actually written an essay about the use of porches in "To Kill A Mockingbird."

Besides being frequently visible throughout the movie, porches help us to understand how the characters view the issue of class, and at times, how they're divided by it, too.

"The porch gets emphasized in the film in this way where public space and private space can kind of merge, so that you can imagine somebody's point of view without actually inhabiting their shoes. So, that's like the explicit moral of the film."

That explicit moral being…

Atticus: "You never really understand a person until you consider things from his point of view —"

Atticus: "— until you climb inside of his skin and walk around in it."

And there it is: Atticus instilling a lesson about empathy — while on a porch.

"She uses porches also to… as stages to establish sort of public identity and the higher and a kind of now hierarchy between people so that it doesn't just happen between blacks and whites. It happens between whites of different classes. When we first meet Walter Cunningham in the beginning of the movie, when he is bringing his entailment payment to Atticus Finch, Atticus is on their back porch receiving the payment. And Atticus and Scout are kind of above Walter Cunningham."

That subtle use of spatial distance conveys the figurative distance between the Finches and Walter Cunningham. This exchange spells out that difference.

Atticus: "We are indeed."

Scout: "We as poor as the Cunninghams?"

Atticus: "No, not exactly."

Scout's porch-side lessons on empathy and class difference come into play when she confronts a lynch mob, led by Walter Cunningham, on its way to attack Tom Robinson.

She then says this to the familiar face of the mob leader:

"You know something, Mr. Cunningham? Entailments are bad. Entailments... "

This porch moment illustrates Scout's understanding and the difference — economically and spatially — between the Finches and the lynch mob of poor white farmers who are ready to kill a black man.

This example and others show that Lee didn't just use porches as a backdrop, but as dynamic spaces that reveal thoughts about the characters and how they see one another.

Audiences will get a chance to revisit "To Kill A Mockingbird" on Broadway and in other formats as the story is debated, referenced and celebrated for years to come.