What Our Currency Says About Us 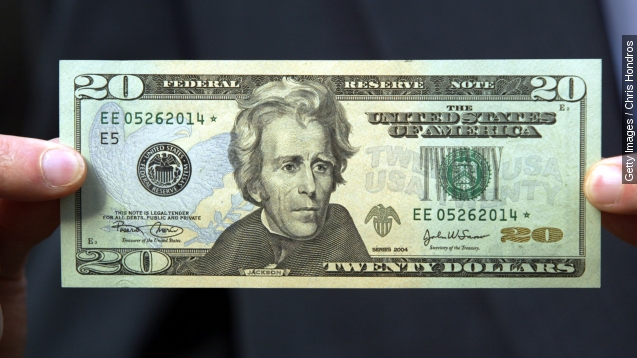 "U.S. currency and the images of great leaders and landmarks that our notes depict has long been a way for us to honor our past, express our values and capture the prevailing sentiment of the time," Treasury Secretary Jack Lew said Wednesday.

When he announced the $10 bill would be featuring a woman's portrait, Treasury Secretary Jack Lew emphasized that our currency says something about our contemporary society. (Video via U.S. Department of the Treasury)

But most of the figures currently featured on our major bills have been there for more than 100 years, and not all of them have necessarily held up to public scrutiny.

The most controversial of them, Andrew Jackson, has been on the $20 bill — through multiple enumerations since 1928 — and historians' perception of his presidency has changed a lot since then. (Video via History Channel)

While earlier historians viewed him as a symbol of American democracy, more recently he's been condemned for his role in orchestrating the Trail of Tears. Jackson pushed through the Indian Removal Act, which led to the deaths of thousands of Native Americans as tens of thousands were removed from their land. (Video via National Parks Service)

That all makes the recent campaign to replace Jackson with a woman pretty unsurprising and the decision to remove Alexander Hamilton — an abolitionist and author of the landmark Federalist Papers — more perplexing.

Ulysses S. Grant on the $5 bill was dogged by corruption scandals, and the legacies of both George Washington and Thomas Jefferson on the $1 and $2 bills were tainted by slavery.

And while it's unlikely Washington will be removed from the $1 bill anytime soon, if the treasury wants to reflect a broader swath of American society beyond presidents and leaders, there are plenty of precedents abroad.

In European countries, artists, scientists and writers commonly feature on banknotes, with the exception of the Euro, which features relatively uncontroversial architecture. (Video via Bank of England, European Central Bank)

While South Africa's banknotes unsurprisingly feature Nelson Mandela on one side, the other is dedicated to the country's big five animals. Belarus for a time had a similar zoological theme to its currency, featuring squirrels and rabbits, among others.

But there's one possible reason it's taken so long to change the faces on American banknotes, as currency historian Mark Tomasko told The New Yorker, "The choices of people on those bills, at this point, is more a tradition than it is a matter of consciously choosing these individuals." (Video via Voice of America)

Still the Treasury Secretary has asked for public input on the changing $10 bill, which could open the door to changing other notes. While squirrels still seem like a long shot, more women might not be.