What Obama And Modi Want Out Of This Week's India Trip 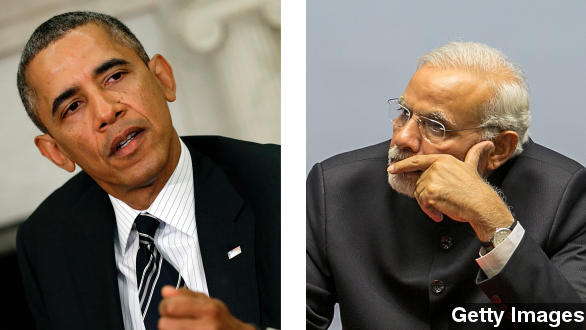 President Obama is in India for three days this week. It's the first time a U.S. president has visited the country twice while in office.

Administration officials said the goal is to stabilize what has been a rocky relationship with India and Prime Minister Narendra Modi, and, as such, the trip will be more about symbolism than practical agreements. (Video via NDTV)

But amid the parade preparations and lavish dinners, the leaders are making time for some statecraft. (Video via Voice of America)

The U.S. wants to boost trade with India and make better use of its significant market potential. Al Jazeera reports the two countries do $100 billion in trade annually, with room for more.

President Obama is also expected to encourage India to support the UN's climate change initiative. India’s backing could build important momentum ahead of UN talks later this year in Paris.

It was already a lot for the leaders to tackle, even before the White House announced plans to cut the visit short.

Officials say President Obama will be leaving ahead of schedule on Tuesday to visit Saudi Arabia and pay respects to the late king Abdullah bin Abdulaziz.