What North Korea's War Of Words Is Really All About 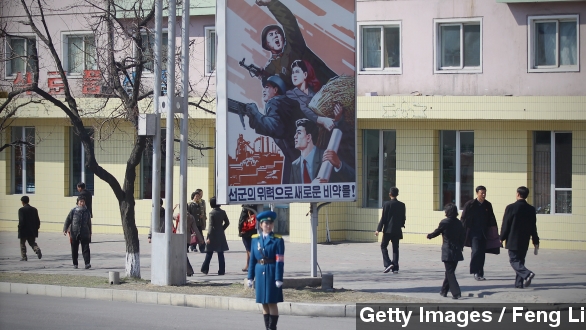 That was President Obama last week, saying the U.S. wouldn't let North Korea escape unpunished from the Sony cyberattack he says the rogue state perpetrated earlier this month. (Video via The White House)

It was just one part of a war of words between the two countries that has been capturing the world's attention.

Now, it looks like it might have led to action, as Vox reports North Korea's Internet appears to be under a cyberattack of its own. An analyst monitoring the country's Web told the outlet: "Usually there are isolated blips, not continuous connectivity problems. I wouldn't be surprised if they are absorbing some sort of attack presently." (Video via ODN)

If it is under attack, as ever with cyberattacks, it's not immediately clear who's behind it, seeing as The New York Times reports, "White House appears to have declined to consider what one Defense Department official termed 'a demonstration strike' in cyberspace." (Video via Al Jazeera)

There's always the possibility that these are non-state actors going after each other, and, despite the FBI's announcement that the Sony hack was North Korea's doing, not everyone's convinced.

As The Atlantic points out, in the wild and often anonymous world of the Internet, it's possible North Korea only claimed the hack after media coverage linked it to the release of "The Interview," seeing as hackers have targeted Sony for years. (Video via Arirang)

And North Korea hasn't claimed responsibility for the attack either, instead focusing on "The Interview" itself and making threats "to stand in confrontation with the U.S. in all war spaces including cyber warfare space to blow up those citadels." (Video via KCNA)

CNN's Kyung Lah explained: "They are trying to up the ante. North Korea craves attention, and they are saying, 'OK, everyone's concerned about cyberattacks? Well, we're going to make it worse.'"

And at least one prominent critic of the country has made light of the beef with the Seth Rogen film.

"The notion that that was a threat to them, I think gives you some sense of the regime we're talking about here," President Obama said.