Why Nancy Pelosi Gave A Marathon Speech On The House Floor 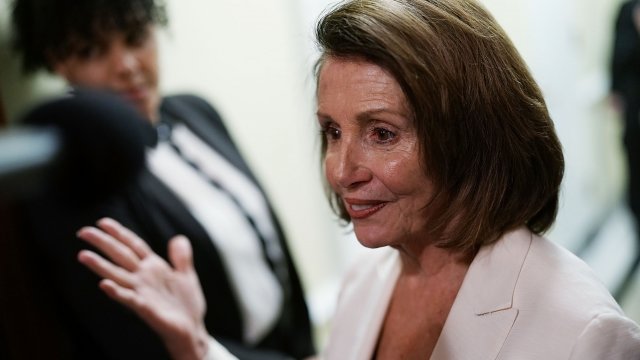 SMS
Why Nancy Pelosi Gave A Marathon Speech On The House Floor
By Jake Jones
By Jake Jones
February 7, 2018
Pelosi used her "leadership minute" on the House floor to speak for several hours.
SHOW TRANSCRIPT

House Minority Leader Nancy Pelosi spoke for more than eight hours on the House floor to push for an immigration vote amid budget negotiations that don't include the issue.

"Members of Congress are trustees of the people of our nation," she said just after 10 a.m. Eastern time. "Why are we here if not to protect the patriotic young people who are determined to contribute and to strengthen America? So I'm going to go on as long as my leadership minute allows."

She was talking about so-called Dreamers, the young undocumented immigrants who fall under Deferred Action for Childhood Arrivals protection.

But that DACA protection expires in March, and the White House signaled President Donald Trump won't extend it. That puts those Dreamers at risk of deportation. Party leaders recently agreed on a two-year spending bill, but it doesn't mention Dreamers.

DACA was a deal made under the Obama administration after repeated failures to pass the 2001 DREAM Act, or Development, Relief and Education for Alien Minors — hence the "Dreamer" title.

Pelosi said in part: "I came here to make sure that everyone who follows Congress knows the stories of these Dreamers and how constant they are with the aspirations of our founders, how proud our founders would be of the aspirations of these young people to make the future better, to give back to community, to pledge allegiance to America, fulfill life, liberty and the pursuit of happiness. ... Imagine founders putting as a purpose of our nation, the pursuit of happiness. ... So I reiterate the statement that I made earlier: This is about the children."

Pelosi's marathon speech was the longest on the House floor since at least 1909. That's because the well-known filibuster is a tool distinct to the Senate. Members of the House only get a minute to make their comments — except party leaders like Pelosi, who get an unspecified amount of time.

There are nearly 800,000 Dreamers in the U.S. Pelosi's speech was intended to force House Speaker Paul Ryan to agree to a vote on immigration legislation.