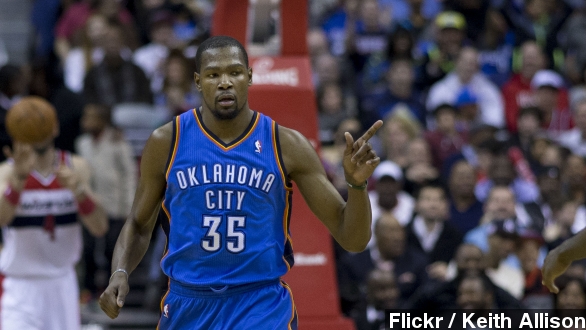 By Danny Matteson
May 6, 2014
Kevin Durant finally overcame LeBron James to take home his first NBA MVP award, but he still has a long road ahead of him in the playoffs.
SHOW TRANSCRIPT

​​The king has been dethroned. LeBron James’ two-year reign as NBA MVP ended Tuesday as Kevin Durant was named the league’s most valuable player for the first time. (Via Flickr / Keith Allison)

And it wasn’t even close. As The Washington Post writes, Durant “destroyed” James in first place voting — carrying 119 first place votes, to a mere six for James.

By the numbers it was one of Durant’s best seasons on record. He averaged 32 points, more than seven rebounds, and five and half assists per game — all while leading the Oklahoma City Thunder to a 59-23 record, good for 2nd in the Western Conference. (Via Yahoo)

He also became the first player to win the scoring title, his fourth, and the regular season MVP award in the same season since Allen Iverson did it last in 2001. (Via Flickr / Keith Allison, Wikimedia Commons / Keith Allison)

Even LeBron himself had to stand back in awe. Quoted by USA Today a day before the announcement, he said, "KD's had one hell of a year … Kudos to him, much respect to him and he deserves it. He had a big-time MVP season."

So it’s a big breakthrough, but what does it mean for Kevin Durant and OKC? Well, it’s a bit of a mixed bag.

In an interview with ESPN’s Chris Broussard, Durant seemed less than excited about the prospect. “It would be cool. As a kid, that’s what you dream about. ... But I’m not worried about it.”

Durant has taken criticism for deferring to other players, often all-star point guard Russell Westbrook, in the past. Some arguing it upsets the team’s chemistry.

And as recently as last week Durant was blasted in this headline from OKC newspaper The Oklahoman — calling him “Mr. Unreliable” for his playoff performance. Durant answered that by having a huge next game and eventual series win over the Grizzlies.

That was before, as LA Weekly puts it, having their Thunder stolen in a game one blowout loss in their second round series against the Clippers.

So, what will it take to give Durant’s MVP legitimacy? Bleacher Report says it’s not about any of the individual numbers, but if the team can get a ring. “Ultimately, postseasons are judged more for how far you got than how well you played. … by how close the Thunder come to winning their 16th playoff game of the season.”

The Thunder next face off against the Clippers in game two of their series on Wednesday. The Clippers Blake Griffin and the Bulls Joakim Noah came in third and fourth in MVP voting respectively.