What Makes The Latest ISIS Beheading Video So Different 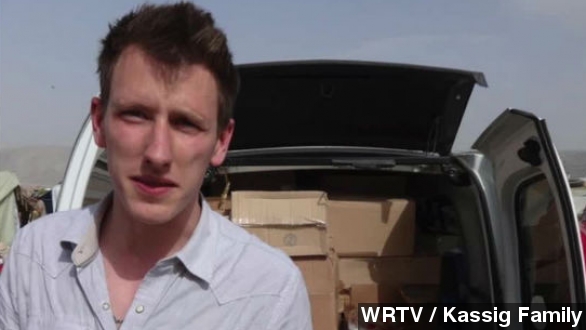 This video, which we’re not showing out of respect for Kassig’s family, is different from the others. It doesn't show the actual beheading, and Kassig is also not shown reading a final statement as the other hostages did.

There are a few theories as to why. The Telegraph suggests Kassig might have tried resisting his captors. One of his friends told the paper: "I think he refused. He was a man of principle and wouldn't give into intimidation from thugs."

In previous propaganda videos — like this one — ISIS demonstrated its high-quality production values with elaborate camerawork and sophisticated graphics. This video, on the other hand, seems rushed, shot in poor lighting with only a single camera angle. (Video via TRAC / ISIS)

Which The New York Times suggests could mean the militants didn’t have as much time to shoot outdoors as they did in previous videos. "Carrying out a similar level of production as surveillance planes crisscrossed the skies above would result in extended exposure — heightening risk."

U.S. officials say the American-led airstrikes against the group have been successful in weakening the group's ability to operate freely. (Video via U.S. Central Command)

PRESIDENT OBAMA VIA CBS: "The airstrikes have been very effective in degrading ISIL's capabilities and slowing the advance that they were making.”

There was speculation the leader of ISIS, Abu Bakr al-Baghdadi — seen here in this July video — had been injured or even killed in an airstrike. (Video via ODN)

To prove he was still alive, ISIS released not a video, but an audio recording purportedly featuring Baghdadi's voice. (Video via Eretz Zen)

That, says one Middle East expert writing for CNN, is "a sign that, like al Qaeda's leaders before them, ISIS bosses are going deeper and deeper underground."

The bombing campaign, however effective in slowing the group's advances, doesn't appear to have stalled the group's killing spree. The latest video also showed the mass execution of more than a dozen Syrian soldiers.