What Makes Africa So Vulnerable To Coups 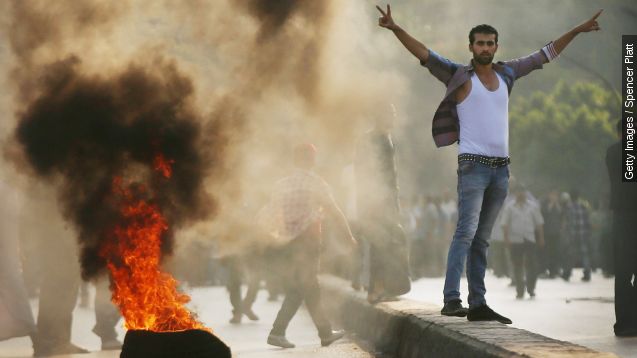 It's not entirely clear who's in charge of Burundi right now. An army general said he overthrew the country's president. (Video via Voice of America, U.S. Department of State)

But the president's office says there was no such takeover.

Whether this turns into a successful coup or just an attempt at one, Burundians are familiar with both. The tiny country has a long history of military takeovers. (Video via Voice of America)

Its neighbors have, too. The Center for Systemic Peace recorded 386 alleged, plotted, attempted and successful coups in Africa between 1960 and 2013.

The continent is disproportionately coup-prone, accounting for about 53 percent of the world's coups or coup attempts since the 1960s.

Most of the successful ones occurring during Africa's immediate post-independence period before dropping off as more governments began to embrace western-style democracies.

But today, plenty of countries remain vulnerable to military takeovers.

So, Africa clearly has a lot of coups — even in its recent history. But why?

Political scientists haven't reached a consensus except to say it would be a mistake to lump all these coups together. Just as each country on the African continent is unique, so, too, are their coups. (Video via United Nations)

The 2012 interventions in Mali and Guinea-Bissau are a great example. They happened within weeks of each other but couldn't have been more different.

Mali, after 20 years of stable democracy, watched as its president was deposed in the middle of the night by a group of renegade soldiers. (Video via Euronews)

Guinea-Bissau's coup was easier to see coming. The country is so coup-plagued, coups had begun to outnumber elections. (Video via Al Jazeera)

That said, when looking at all these coups, there are some common factors: namely, low income and lack of economic growth.

That's according to researchers at Oxford's Centre for the Study of African Economies.

Or to put it another another way, "[Coups are] a problem of poor countries with weak states, and Africa happens to have more than its fair share of those." That from political scientist Jay Ulfelder, who points out Latin America experienced a lot of coups back in the '60s and '70s when the region was poorer and less democratic.

Another common theory for Africa's coup problem is known as coup contagion. That's the idea that a coup in one country increases likelihood of a coup nearby. (Video via Amnesty International)

Already, regional leaders have expressed concerns the ethnic violence between Burundi's Hutus and Tutsis could spill over into neighboring Rwanda, which has its own legacy of bloodshed. (Video via Voice of America)

This video includes images from Getty Images, Library of the Chilean National Congress / CC BY 3.0 CL and the Brazilian National Archive.