What Made The Trump-Kim Summit Possible? 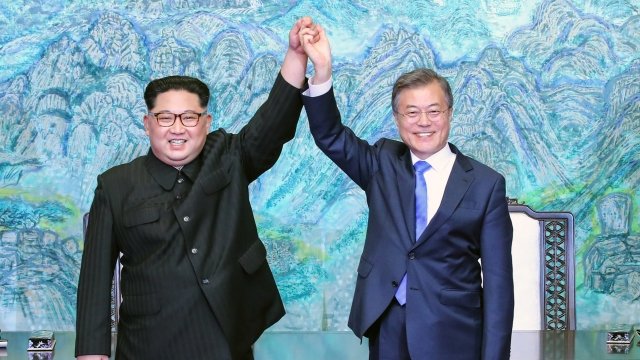 SMS
What Made The Trump-Kim Summit Possible?
By Chance Seales
By Chance Seales
June 8, 2018
As President Trump prepares to meet with Kim Jong-un, a lot has changed to make the summit possible.
SHOW TRANSCRIPT

Donald Trump took an interest in North Korea well before taking the oath of office.

Spring 2013 saw a rush of tweets from Trump Tower … dinging China for taking it easy on the regime … smacking South Korea for not paying for American defenses … denouncing President Obama for going wobbly-kneed before adversaries.

This tweet in April 2013 — just months into Obama's second term: "Our President must be very careful with the 28-year-old wack job in North Korea. At some point we may have to get very tough - blatant threats."

Once he formally jumped into the 2016 presidential race, Mr. Trump made a habit of both buttering up and dressing down world leaders. It would be a game-changer, he promised. The key was to charm world leaders when possible, and punch when necessary.

The man who made his name in hard-nosed, high-dollar Manhattan was certain that his know-how, his negotiating skills, were the missing piece.  He hinted a summit, like the one he's about to participate in, might work.

"One of the papers called the other day and they said, 'Would you speak to the leader of North Korea?'" Trump said. "I said, 'Absolutely, why not? Why not?' And they come out, 'Trump would speak to him!' Who the hell cares? I'll speak to anybody."

The path to talks has been tumultuous. President Trump took office Jan. 20, 2017.  Weeks later, the heat was already cranking up.

"North Korea firing off a ballistic missile into the Sea of Japan, confirmed as the president was hosting Japan's prime minister at the time at Mar-a-Lago," an ABC News anchor said. "The leaders responding with a swift joint statement, calling the test launch 'intolerable,' and Trump assuring the U.S. has Japan's back 100 percent."

Unbowed, North Korea tested one missile after the next. CNBC put together this timeline of all the launches during President Trump's first year in office … some successful, some not.

"The United States does not seek conflict. In fact, we seek to avoid it," Haley said. "We seek only the peaceful denuclearization of the Korean peninsula and an end to the threatening actions by North Korea. Regrettably, we're witnessing just the opposite. Make no mistake: North Korea's launch of an ICBM is a clear and sharp military escalation."

The Kim regime kept shooting off at the mouth and into the air, while in the South … a new government, led by President Moon Jae-in, was taking shape. Moon based his campaign, in part, on engaging with Pyongyang. Meanwhile, the Trump team led the UN Security Council — including Russia and China — to pass new sanctions on North Korea.

While Haley worked to cut off Pyongyang from the world, President Trump reached for his go-to weapon: verbal threats.

"He has been very threatening beyond a normal statement," Trump said. "And as I said, they will be met with fire, fury and, frankly, power, the likes of which this world has never seen before."

And in September, Trump spoke to the United Nations General Assembly.

"The United States has great strength and patience, but if it is forced to defend itself or its allies, we will have no choice but to totally destroy North Korea. Rocketman is on a suicide mission for himself and for his regime," Trump said.

Moon Jae-in had been president of South Korea for less than a year and had major promises of de-escalation to fulfill. Caught between a diplomatic partner and geographic brother, Moon set out on a peacemaking mission.

As an opening bid, he invited North Korea to participate in the 2018 Winter Olympics in South Korea.

The next month, in March, Moon's emissary to the United States came with a proposition, conveyed directly to — and accepted unilaterally by — President Trump, who then sent the South Korean official onto the White House driveway to make the announcement.

The U.S. president had agreed to meet with North Korea's leader for the first time ever.

In April, another history-making moment: President Moon met Kim Jong-un in person at the DMZ. The date of the Trump-Kim meeting was decided, and public statements stayed fairly sunny. Kim released the last Americans held prisoner in North Korea.

"Kim Jong-un did a great service. We're going to make a great deal for the world," Trump said.

As the date drew near, Kim made a surprise trip to meet with Chinese President Xi Jinping. Suddenly — and nobody has revealed why — North Korea appeared to backtrack on its previous pledges, including denuclearization. And the United States and South Korea continued military exercises — a major issue for Pyongyang. And it called Vice President Mike Pence a "political dummy" for making the suggestion that Pyongyang could go the way of Libya and warning, "Whether the US will meet us at a meeting room or encounter us at nuclear-to-nuclear showdown is entirely dependent upon the decision and behavior of the United States."

It welcomed reporters to its only known nuclear test site … and blew some of it up. Though, it appears that was mostly for show, and some important equipment and tunnels may still be usable.

Days later, May 24, with less than a month to go, Mr. Trump canceled the meeting, writing a personal letter to Kim and posting it on Twitter. That's when South Korea's president had his second sit-down with Kim, hoping to save the summit.

Then North Korea's former spy chief Kim Yong-chol made his way to the United States — first to New York to meet with Secretary of State Mike Pompeo, then to Washington, with a giant game-show-sized envelope from Kim Jong-un … with a secret message.

Kim says he is committed to denuclearization, but his definition appears to be significantly different from Trump's.

"They want it," Trump said. "We think it's important. And I think we'd be making a big mistake if we didn't have it. I think we're going to have a relationship and it'll start on June 12."