What Kind Of Athlete Will The Next President Be? 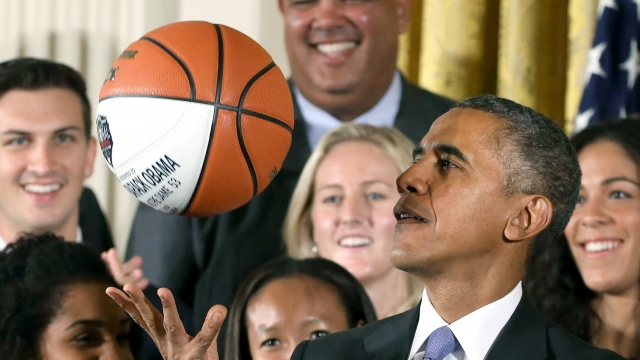 SMS
What Kind Of Athlete Will The Next President Be?
By Matt Moreno
By Matt Moreno
February 10, 2016
Although we knew President Barack Obama was an athletic basketball player, Bernie Sanders is also surprising many with his hoops skills.
SHOW TRANSCRIPT

For years, sports have been a staple of the U.S. presidency.

We knew 48-year-old President Obama had some skills.

"This could be it," President Obama said.

But how athletic are the current POTUS candidates?

"Let's see what you got," Obama joked to Kellogg.

"This is the 74-year-old Vermont senator who's getting ready to give a big victory speech. He's making some shot there," Fox News' Bret Baier said.

"Is this some sort of a joke? How's he making every single one?" Fox News' Megyn Kelly said.

While there's no footage of Hillary Clinton shooting hoops, she was active as a kid.

On the GOP side:

Donald Trump might own a few golf courses, but that doesn't mean he can't own the WWE stage, too.

"NFLer who would make the best politician?" a narrator for a Marco Rubio ad asked.

But let's not forget about this funny moment.

Ted Cruz admits he wasn't much of an athlete as a kid.

He tries to make sports references. (But they're not always the best.)

"Tom Brady was framed, and I have it on good authority that Hillary Clinton did it," Cruz said.

Now the question remains: Who will drive the lane to the White House come November?