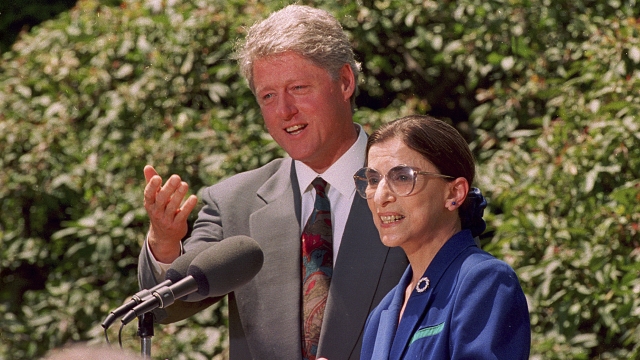 James Packard: "I want to bring in now Molly Roberts. She joins us. She is an opinion writer for The Washington Post. Molly, it's good to see you. Your mother, Edith Roberts, clerked for Justice Ginsburg. She wrote a piece about their relationship for The Washington Post. I just wonder Molly. First of all, if you could talk about what Justice Ginsburg meant to you and to your mother."

Molly Roberts: :Absolutely. I think what Justice Ginsburg meant to me and to my mother was both personal and also bigger what she meant to women all across the United States. She really did fight for the world that we're living in now when it comes to a gender discrimination. Both in her career is a litigator and her career on the court. I think for my mother, she was a role model in that regard and also a mentor and also really a friend. My mother and father both clerked for her when she was on the Court of Appeals for the D.C. circuit, and she taught them how to do good legal analysis. But she also showed them that really, at heart, she was a very kind person, a diehard romantic who ended up officiating at their wedding, and my mother's told me a story of how once after that wedding she invited all her clerks — she loved her married clerks — out to this dinner, and she had custom ordered fortune cookies for dessert at the dinner and when you broke them open on the fortune there lines from the Eskimo love poem little schmaltzy that my parents had recited in lieu of vows at their wedding."

Packard: "I can't tell you how many how many times I've heard that anecdote of she was the officiant at our wedding over the last last several hours. It seems she did that for a lot of the people in her life. And you know, the title of your mother's piece, Molly, is 'Ruth Bader Ginsburg: A Precise Female.' You know, when I see that, I think of you know, the way she spoke, she often would take these long pauses and think about the words that she was about to say the preciseness of her speech. I mean, when when you see that title from your mother's piece, what is precise in terms of Ruth Bader Ginsburg, mean to you?"

Roberts: "Well, I think this also comes through and runs through my mother's piece. The justice cared a lot about getting it quote unquote just right. That's what she would write in the margins of the draft opinions that her clerks would do for her when they got it right. Of course, more often than that, she was cutting and pasting by hand what she thought that they'd done wrong. I think that you learn as a woman and learned even more back then that you have to get it just right to rise to the level that men have a much easier time reaching in your career, and I think that she had completely mastered the art of communicating. That's what made her an effective litigator. But it's also what made her such a darling of the progressive public in recent years. When she earned her name for being the great dissenter, she would come on the bench and she would read these dissents that were blistering and pithy. That line about how getting rid of preclearance for Southern states in changing their voting laws because they were working would be like throwing out your umbrella in a rainstorm because you weren't getting wet has really gone down in the past few years, and I think will go down in history as one of the best lines from a descent ever, because she just really knew how to write."

Packard: "When we think about history, I mean the legacy that she leaves going forward. Molly, how we'll think about her in decades to come, regardless of whether her vacancy is filled by this president or a different president. Surely that will paint a part of it. But in terms of her legacy on our culture, on our civics, what do you think we're gonna be thinking about in in decades to come of what she's meant to this country?"

Roberts: "I think that she would hope in decades to come that when we look at the Supreme Court and we see women on the Supreme Court, maybe we won't even have to remember that it was so, so hard to get there. Maybe we will see that as normal. I think she put it once just the way it is. And one thing that she said that I've read in these past few days that was really touching when she was confirmed, was about her mother that she hoped she could be all that her mother would have been in a world where things were easier for women. And the way she put it was where daughters air cherished just as much as sons."

Packard: "Molly Roberts, I appreciate your insight on this. Someone who knew her personally. And obviously she meant so much to your parents as well. Thank you so much for your time and your remembrance of the late justice. I appreciate it."

Roberts: "Thank you for having me."