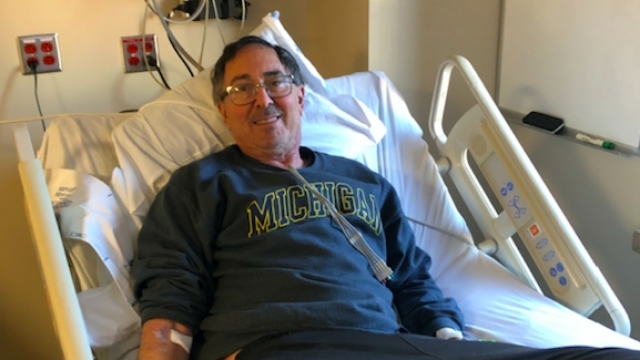 SMS
What It's Like To Have COVID-19, From Patient Who's Had It For A Month
By Lindsey Theis
By Lindsey Theis
March 12, 2020
He's tested positive for Covid19 every day since February 15th. Now, Carl Goldman must have three negative tests in a row before he can go home.
SHOW TRANSCRIPT

67-year-old Carl Goldman has tested positive for Covid19 every day since February 15th, the day he was evacuated from the Diamond Princess cruise ship in Japan.

"Two hours after our takeoff, I woke up and realized I had a very high fever. We were on a cargo plane, so there were no stewardesses. Only three medical personnel. They were all in hazmat suits. There was an Air Force doctor and then his med team with them. And so I went up to him, got my fever checked. He confirmed I was above one hundred and three and put me in a quarantine area on the plane that they had set up with plastic very thick plastic trying to keep us removed from the rest of the passengers. There are already eight others in there with me. I buckle my seat belt and was exhausted. So I simply fell right asleep," he recalled to Newsy.

Goldman was taken to the biocontainment unit at Nebraska Medicine in Omaha. He was considered high risk because he has Guillain-Barré syndrome, a rare autoimmune disorder. But he says, his symptoms have been mild. Dry cough, fatigue, dehydration from his 103 fever which subsided quickly. It’s easier to list what he DIDN’T have. 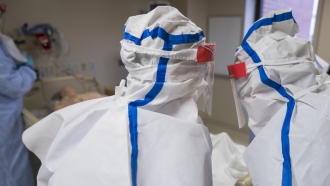 Inside The Biocontainment Units Caring For Coronavirus Patients

"I didn't have a headache, didn't sneeze, didn't have stuffing, as with the nose, no sore throat, no aches and pains. And what's even weirder is with that higher fever, usually I'd get chills. And then, you know, sweats are going hot to cold. That never happened either. At least not consciously, because I was sleeping a good chunk of the time."

There is no known treatment for Covid19, so doctors gave Goldman acetaminophen for the fever, and lots of fluids. On February 29th, doctors moved Goldman to a quarantine unit. He’s staying upbeat. He owns a radio station in California, and is able to operate it remotely from within the quarantine unit. His wife, who never had the virus, returned home after her quarantine. For him, the hardest part mentally has been dealing with some of the backlash from other people.

"When my wife did come back to Santa Clarita, she's been shunned by a small percentage of people, but still enough to have an impact. Our kid who was watching our house and dogs overnight. When my wife, Jeri, came home the next day, he came to our house in the morning to return our keys, then went into his work and he was instantly fired by his boss because he had been in contact with Jeri. And Jeri is someone who never had the virus," he said.

Goldman must have three negative tests in a row, 24 hours apart, before he can be released to go home.

"Every day when I do my tests, every other day, the doctor comes in. And I get a Post-it note that shows me my condition. That's it. So I've been collecting many positive Post-it notes, waiting now for the right color to return. The tests are done sticking a swab deep up each nostril and down the throat. Not a fun process," he said.

For now, while he waits, he’s participating in a case study, where clinicians take extra blood, stool, and swab readings, hoping to learn more about this coronavirus. 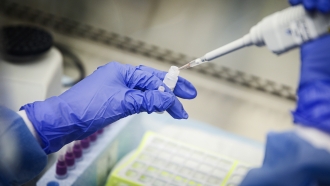 How Do Doctors Decide Who Gets Tested For Coronavirus?

"The clinical study I'm doing won't help me, but it hopefully will provide some clues and answers to folks and scientists further down the line here to try and get the virus in containment," he said.