What It's Like To Get Kicked Out Of A Trump Rally 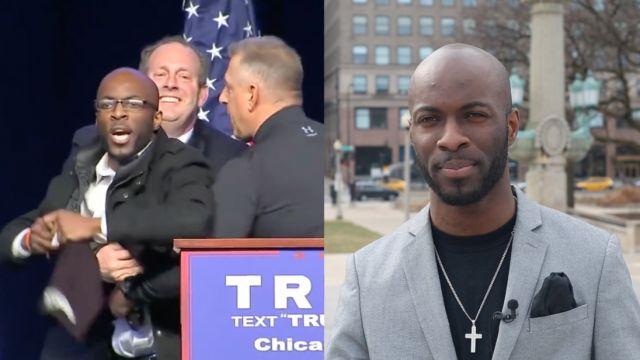 SMS
What It's Like To Get Kicked Out Of A Trump Rally
By Jamal Andress
By Jamal Andress
March 17, 2016
Jedidiah Brown rushed the stage at the canceled Trump rally in Chicago last week, and he told Newsy what happened after that moment.
SHOW TRANSCRIPT

"Some of these protesters were violent, they were swinging, they were hitting people and they were doing damage, and frankly, the crowd turned on them," Donald Trump said about the rally in Chicago.

One of the men the crowd "turned on" was Jedidiah Brown.

"As a Chicagoan, anything that happens on Chicago soil I care deeply about, and I didn't want a hatred campaign to be able to operate here without being interrupted," local activist Jedidiah Brown told Newsy.

Brown is featured in the video of choice for outlets all across the country to help explain the chaos of a canceled Donald Trump rally in Chicago.

"Personally, I wanted to know if the environment I saw in the media was real. ... From the beginning to the end you just saw all kinds of discriminatory racist remarks. ... I remember a group of Caucasian males asking me was I purchasing my food on welfare," Brown said.

"For the safety of all the tens of thousands who have people that have gathered in and around the arena, tonight's rally will be postponed until another date," Trump's announcer said at the rally.

"When it's announced that the Trump rally is postponed, Trump is not coming out to speak. You see this amazing overwhelming happiness from those who are not Trump supporters. ... Now you also see real anger and the racist remarks intensify," Brown said.

"I got up there and I said America's already great, without the hate," Brown continued.

Things only got more hectic for Brown after he rushed the stage.

"I was definitely called the N-word a whole lot. ... I had a gentleman throw a water bottle at me ... I had another gentleman jump on my back, put me in that chokehold ... it was exactly what was portrayed in the media times 22,000," Brown said.

"The thing that sticks with me the most is the level of unity and the effect that it had. ... You had Hispanics, you had Muslims, you had women, you had men ... that were all together saying we're not for the hatred this campaign spews out," Brown said of the crowd at the rally.

"We did that, not just for Chicago but for the world, and I'm very happy about it," Brown said.

This video includes clips from, KTVU, Conservative Outfitters, WLS-TV, CNN and US Uncut and images from Getty Images.