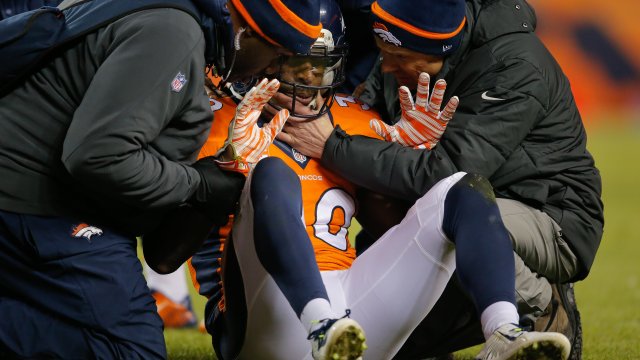 Chronic traumatic encephalopathy, or CTE, the devastating degenerative brain disease afflicting many pro football players, is not new. The condition was identified in 1928 when Dr. Harrison Martland described boxers as having "punch drunk syndrome."

A few years later it got a new name: dementia pugilistica. Then later it was called psychopathic deterioration of pugilists. In 1949, it got the name it goes by today: CTE.

Intense media attention began in 2005 when the condition was linked to professional football, thanks to postmortem evidence of CTE in former Pittsburgh Steeler Mike Webster.

Exact data of its prevalence is hard to come by, since a full diagnosis is only available after death. Regardless of what the condition was called, the symptoms were the same: Memory loss, confusion, impaired judgment, impulse control problems, aggression, depression, suicidality, parkinsonism, progressive dementia.

CTE starts with repeated head trauma — a boxer getting punched in the head over and over; a football player suffering head blows. Inside the brain, here's what’s happening: There's atrophy of brain structures, including the cerebral cortex, which is involved in processing language, planning, intelligence and personality.

But the telltale sign of CTE is accumulation in neurons of a protein known as tau, which forms clumps that slowly kill brain cells. Symptoms can show up in a patient's 20s or 30s, typically with impulse control problems, aggression, depression, paranoia. Cognitive problems tend to appear later, generally in their 40s or 50s.

Symptoms can worsen with time, even with no new head injuries, but sometimes patients are stable for years before getting worse. CTE is sometimes misdiagnosed as Alzheimer's or other forms of dementia. Some patients develop muscle weakness and spasticity similar to ALS.

It proves deadly for a number of reasons, including respiratory failure, suicide, drug overdose and dementia-associated decline. Scientists don't yet know how much trauma will catastrophically harm individual brains, and they don't know why different players have radically different outcomes after years of blows to the head.