What Is Al-Qaeda Offshoot ISIS? 5 Things To Know 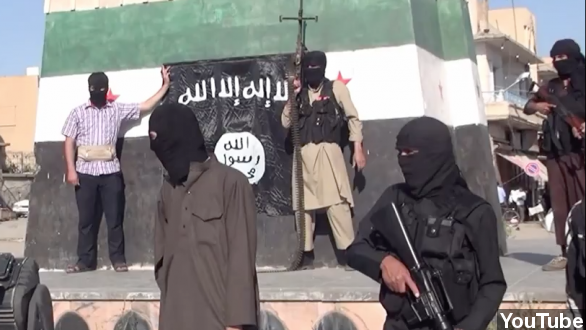 SMS
What Is Al-Qaeda Offshoot ISIS? 5 Things To Know

By Elizabeth Hagedorn
June 11, 2014
The jihadi fighters in ISIS are known for their brutal tactics considered too extreme even for Al-Qaeda.
SHOW TRANSCRIPT

If you were paying attention to the news Tuesday, you likely heard this name.

"ISIS now controlling parts of this major city." (Via CNN)

"These radical militants belong to ISIS." (Via ABC)

On Tuesday, ISIS militants seized airport and TV stations in the Iraqi city of Mosul, freed more than 1,000 prisoners and sent police and soldiers running from their posts. (Via ITN)

So who is the group behind the takeover of Iraq's second-largest city? Here are five things you should know.

First on the list, the ISIS started out as an Al-Qaeda affiliate. Otherwise known as the Islamic State of Iraq and Syria, ISIS is a Sunni jihadi group responsible for some of the most brutal atrocities in the Iraq War. (Via YouTube / Nasrun min Allah)

About a year ago, ISIS broke off from Al-Qaeda and expanded its reach into Syria, and it's now vying for supremacy among rival jihadi groups. (Via YouTube / المركز الإعلامي بالقصير)

​​Next up, like its name suggests, the group's goal is to establish a caliphate — an Islamic state spanning from western Egypt to northern Iraq. (Via YouTube / Aqeedah Tawheed)

As this graphic from The New York Times shows, ISIS now has huge swaths of territory under partial or complete control — notably Fallujah and Ramadi.

Which brings us to No. 3 on our list. ISIS is using Western recruits — claiming to have fighters from the U.S., France, Germany and other Western countries. (Via All Eyes On Syria)

​Thanks in part to recruitment videos like this: "I also invite all over to the London jihad." (Via Rayat Al Tawheed)

The fear is those recruits will gain valuable training and return to their home countries to carry out attacks.

​If you want an idea of how extreme ISIS is, consider this: Even Al-Qaeda thinks the tactics ISIS uses are too brutal — tactics that include beheadings, public executions and amputations. (Via YouTube / شبكة الرقة الاسلامية))

In February, Al-Qaeda kicked the group out of its terror network and called for it to leave Syria. (Via Al Jazeera)

​Finally, Tuesday's takeover of Mosul generated a lot of talk among observers over whether the Islamic State of Iraq and Syria was on its way to becoming essentially its own state.

Douglas Ollivant, an adviser on Iraq for the Bush and Obama White Houses, put it this way to The Washington Post: ​"This is a force that is ideologically motivated, battle hardened and incredibly well equipped. ...  It has all the trappings of a state, just not an internationally recognized one."

According to the International Organization for Migration, since the fighting started this weekend, more than 500,000 civilians have fled Mosul.