What In The World Is Going On With Oregon's Governor? 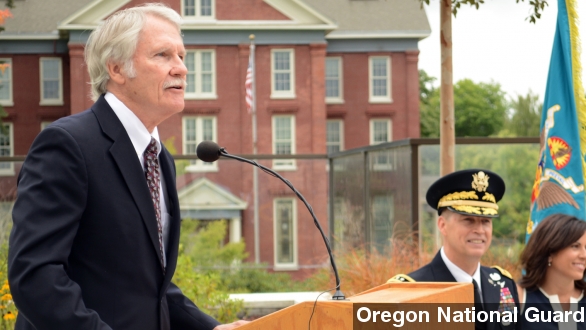 SMS
What In The World Is Going On With Oregon's Governor?
By Ben Levin
By Ben Levin
February 13, 2015
Oregon Gov. John Kitzhaber announced his resignation after his fiancee was accused of profiting from her connections to the governor.
SHOW TRANSCRIPT

Oregon Gov. John Kitzhaber, a Democrat, announced his resignation Friday, ending one of the strangest political scandals the state has seen.

This is a big deal because Kitzhaber is an institution in Oregon politics: He was elected to serve as governor for the first time in 1994, then again in '98, then later in 2010 and 2014. (Video via John Kitzhaber for Oregon Governor)

But shortly after his most recent inauguration, it was discovered Kitzhaber's fiancee, Cylvia Hayes, was allegedly using government contacts to enrich her private business. (Video via KOBI)

"Kitzhaber says the couple knew they were operating in a gray area and tried to keep clear lines between her activities as first lady and her paid work as an environmental consultant," KOIN reported.

Hayes earned about $213,000 as a consultant during Kitzhaber's first term, and multiple sources said she frequently guided government contracts toward firms that did business with her.

She's now being accused of running what's called a "pay-for-play" scheme where her influence over the former governor was translated into jobs and money for people willing to give her business.

This isn't the first time we've seen negative press surrounding Hayes. In October of last year, she admitted to a 1997 green-card marriage, for which she was paid $5,000.

"Seventeen years ago I made a serious mistake by committing an illegal act when I married a person so that he could maintain residency in the United States," she's said of that decision.

Oregon voters were able to forgive a sham-marriage, but they weren't willing to forgive this. Political leaders from both sides of the aisle are calling for the governor's resignation.

"I met with the governor this morning, and the speaker and I both met with him, and I asked him for his resignation," said Oregon Senate President Peter Courtney.

With Kitzhaber now gone, Oregon's next governor will be the current Democratic Secretary of State Kate Brown. And here's where it gets a little weird: On Wednesday, Kitzhaber reportedly asked Brown to return to Oregon from a conference in Washington, D.C., for a one-on-one meeting. (Video via Oregon Social Business Challenge)

Brown returned, meeting with Kitzhaber Wednesday afternoon. The governor was expected to announce his resignation at that meeting, but instead he apparently asked Brown why she "came back early," conveniently ignoring the fact he asked her to.

Brown herself said the meeting was strange, calling it a "bizarre and unprecedented situation."

Bizarre and unprecedented are good words, but others have also called the whole thing "illegal." As of Friday, both the state attorney general and the FBI are looking into the couple.

This video includes an image from the Oregon National Guard.