What If The Iran Nuclear Talks Fall Through? 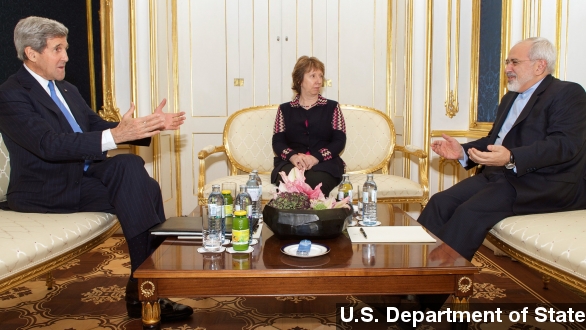 SMS
What If The Iran Nuclear Talks Fall Through?
By Matt Picht
By Matt Picht
November 23, 2014
Iran and six world powers are bumping up against a deadline to reach an agreement on its nuclear program. If the talks break down, what happens?
SHOW TRANSCRIPT

There's not much optimism left that negotiators between Iran and a panel of six countries can reach a satisfactory deal on Iran's nuclear power plants before a deadline Monday.

Despite all the progress made over the last year, stark differences still remain between the two sides, and most outlets are predicting the talks will be extended once again to a May deadline, buying the negotiators more time to hammer out a comprehensive deal. (Video via Voice of America)

And although a total breakdown in negotiations seems unlikely at this point, that possibility always exists. So, if the talks do completely collapse without any deal or extension, what happens next?

First off, abandoning the talks would mean the repeal of all the progress made so far. Iran would be free to enrich uranium beyond 5 percent, build and install as many nuclear enrichment facilities and centrifuges as it wants and wouldn't have to submit to U.N. inspections. (Video via Euronews)

For its part, the West can be expected to bring back sanctions on $6 billion of Iranian assets and will probably impose even more restrictions on Iran's crippled economy.

And of course, there are political consequences for President Obama and Iran's President Hassan Rouhani. Hardline conservatives in both countries have been skeptical of dealing with the other side, and a diplomacy breakdown is likely to embolden critics of the dealmakers.

In the long term, failing to maintain a nuclear deal would force both sides of the agreement to find other ways to meet their goals.

For Iran, that means subverting Western sanctions by forging closer economic ties with Russia and China. But Iran still won't be able to escape the most damaging restrictions on its energy and finance sectors.

And absent diplomacy, the West would have to find other ways of preventing Iran from becoming a nuclear state.

But the West's biggest threat — military action — could make things even worse. As one Bloomberg writer notes, "If Iran is subject to a preventative attack, many of the U.S.'s allies in the sanctions campaign will melt away. Much of the world will express sympathy for an Iran under attack, and Iran could capitalize on that sympathy to rebuild its nuclear weapons program in the open."

Given everything that's at stake, many observers are urging the negotiators to keep talking, even without substantial progress. As The Guardian notes, the Iran nuclear talks have simply become "too big to fail."