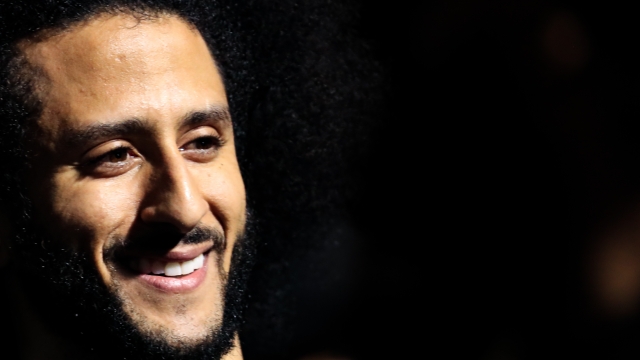 SMS
Where Has Colin Kaepernick Been Since The NFL Kneeling Protests?

By Gage Jackson
November 19, 2019
The Super Bowl quarterback found himself jobless in 2017. But a recent NFL workout showed he's still got an arm. Here's what he's been up to.
SHOW TRANSCRIPT

Fans were able to catch a glimpse of free-agent quarterback Colin Kaepernick this month as he hosted a workout for NFL teams and scouts.

This was his first action in front of NFL personnel since his controversial departure from the league almost three years ago. But what has he been doing in the meantime?

After Kaepernick led the controversial kneeling protests in 2016, he decided to opt out of his contract with the 49ers in March 2017 in the hopes of finding a better situation. But no offers came. When the next NFL season started up, Kaepernick was without a job.

In October 2017, he filed a grievance against the NFL, accusing all 32 teams of colluding to keep him out of the league. Kneeling protests continued without him, but the NFL owners approved a new league policy in May 2018 saying players had to stand for the anthem or face hefty fines.

Just a few months later, Nike teamed up with Kaepernick for a new ad campaign with the slogan, "Believe in something. Even if it means sacrificing everything." That set off a new wave of controversy, and critics of Kaepernick's anthem protests boycotted Nike and started sharing videos of themselves burning Nike gear on social media.

Fast-forward to February 2019: Kaepernick's lawyers announced the grievance he'd filed against the NFL nearly two years prior had been settled for an undisclosed amount of money.

This all leads up to the NFL announcing this month that it was setting up a private workout for the free-agent quarterback at the Atlanta Falcons practice facility. It said all 32 teams would be invited to watch.

But the workout was facing complications before Kaepernick even had the chance to throw a ball.

Kaepernick's camp fought with the league over which teams would be attending, over whether media would be allowed in and over the waiver the NFL required him to sign.

On the day of the event, 25 teams sent representatives to Atlanta. But the NFL was reportedly told less than an hour beforehand that Kaepernick had moved the workout to a high school an hour away. Only eight teams decided to meet him there.

Kaepernick completed his 40-minute workout — and showed he still has an arm by completing deep balls to his receivers. He finished up by signing some autographs before addressing the media for the first time in years.

Kaepernick reportedly talked to teams including the Redskins, Jets and Chiefs, but it's unlikely that a team will sign him to its active roster in the middle of the season. That said, with quarterback issues lingering throughout the league, some teams could show more interest in the Super Bowl quarterback as they finish up the second half of the season.