What Has Astronaut Tim Peake Been Up To In Space? 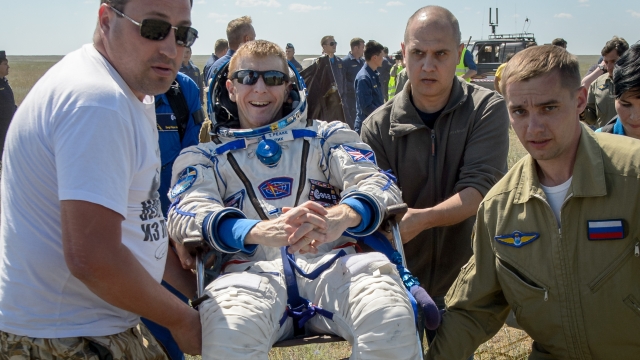 SMS
What Has Astronaut Tim Peake Been Up To In Space?
By Ethan Weston
By Ethan Weston
June 18, 2016
The British astronaut was really busy on the International Space Station before he returned to Earth on Saturday.
SHOW TRANSCRIPT

After six months in space, astronaut Tim Peake — Britain's first on the International Space Station — bid farewell early Saturday morning. But while he was up there, he did some pretty cool stuff.

For one thing, Peake ran the London Marathon on the ISS — or at least the equivalent distance on a treadmill — beating the previous record for running a marathon in space.

Peake also showed off the cool effects of microgravity for those of us back on Earth — like how you drink water in space.

A rare space gorilla even chased him around the space station — or maybe that was just former astronaut Scott Kelly in a costume.

But it wasn't all fun and games 220 miles above Earth. There was science to do.

Like the routine spacewalks for maintenance. Preparing for those could take up to five hours.

And on his return trip, he brought home micro-organisms that've been living outside the ISS. We'll see if they survived the extreme conditions of space.

As it turns out, many astronauts also love photography. And while cameras are mainly used to document experiments or take pictures for mission control, Peake snapped some amazing photos of the Earth — and beyond.