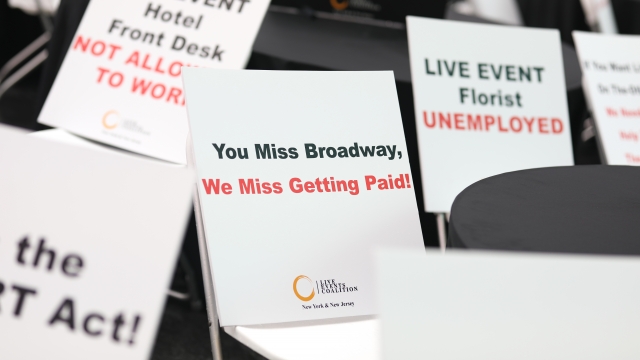 SMS
What Happens To Theater Workers When The Show Can't Go On?
By Casey Mendoza
By Casey Mendoza
October 13, 2020
Arts advocates are pushing for financial help as Broadway stays closed until summer 2021 and the overall theater industry has ground to a halt.
SHOW TRANSCRIPT

Nik Whitcomb, actor and director says, "I used to have at any time like five to seven jobs. And so on March 12, when they announced that everything was closing, at least in Chicago, all those jobs went away."

The "prolonged intermission" of theaters and performing arts centers across the country as a result of the pandemic has continued for more than half a year now. Broadway alone — home to nearly 97,000 theater workers — announced last week that it was extending its closures to at least June 2021.

Howard Sherman, arts administrator and advocate says, “I think it’s really important that people realize that these are jobs. They’re jobs with specialized skills. There is a product created.”

On top of current uncertainties, some in the industry worry that without economic support, the post-pandemic theater industry could become more elitist in its workforce — accessible only to actors, technicians and other creatives who had the financial resources to survive months of unemployment.

Sherman explains, "The people who can afford to struggle are people who have other resources to rely on."

The months of shuttered theaters and productions happened alongside conversations about discrimination and racism in the industry, so the other concern is that the economic hardships of the pandemic could slow the progress toward equity and justice.

Sherman says, "What we've seen happen in this period when no one's performing is an extraordinary reset — resetting of priorities about diversity, inclusion, equity, accessibility. It's incredibly important, and it's been far too long in coming."

"There is a small concern that the people that need the relief are going to fall through the cracks," said Whitcomb.

Unions and organizations like the Actors Fund or Broadway Cares are filling in the financial gaps through donations to support struggling theater workers. Groups like the Broadway League are also pushing lawmakers to pass legislation for financial relief.

But even after theaters return to normal, many in the industry want to make sure that the re-hiring of workers is as diverse as possible.

Whitcomb: "Theaters that have big donors really need to be conscious about making sure that when we come back to wherever that is, that they're not choosing the stars … but they're choosing the artists that lost work, and that have families to feed, and bills to pay, that need the work."