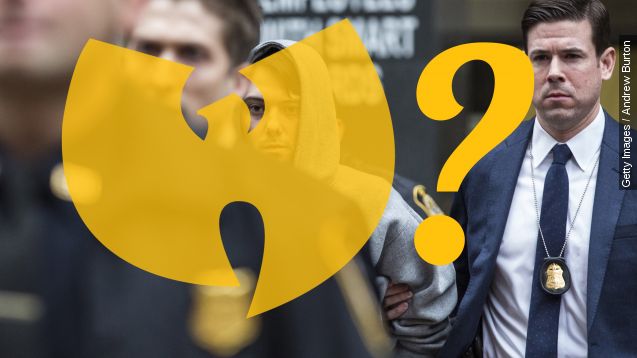 SMS
What Happens To Martin Shkreli's $2M Wu-Tang Clan Album Now?
By Katie Link
By Katie Link
December 17, 2015
He won't need it if he ends up in jail, right?
SHOW TRANSCRIPT

The arrest of pharma CEO Martin Shkreli leaves just one burning question: What about Wu-Tang?

Shkreli paid $2 million to own the only copy of "Once Upon A Time In Shaolin." But his arrest could change things. Here's how. (Video via Forbes)

1. Asset forfeiture. Basically, law enforcement takes cash and other goods from a suspect if it can be tied to the crime.

"Are there any large sums of money over $5,000 in cash in the vehicle? How much money you got? Any large amount of U.S. currency in there? I'll take whatever cash you got in there, and is that a Slurpee in the cupholder?"

That practice has had a bad rap recently.

But asset forfeiture seems to have been ruled out.

2. Shkreli sells it to raise funds to pay for his defense. But ... ego. So, probably not that either. (Video via CBS)

3. He's convicted and the government gets a money judgment against him.

That would let the government take any of his assets to satisfy their judgment, album included. (Video via YouTube / WuTangClanVEVO)

4. "The seller may legally plan and attempt to execute one (1) heist or caper to steal back 'Once Upon A Time In Shaolin,' which, if successful, would return all ownership rights to the seller. Said heist or caper can only be undertaken by currently active members of the Wu-Tang Clan and / or actor Bill Murray."

Because contractually sanctioned burglaries are OK? And because Bill Murray should never sit on the sidelines.