What Happens Now That Trump Left The Iran Nuclear Deal? 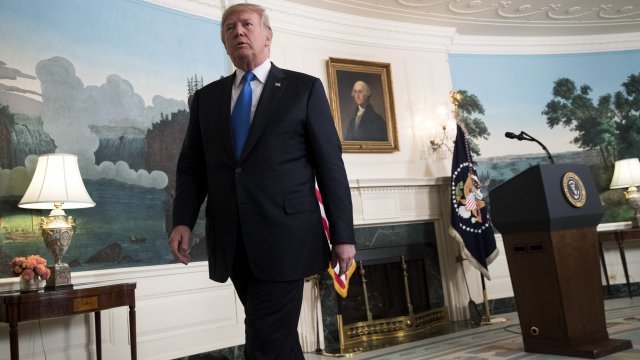 SMS
What Happens Now That Trump Left The Iran Nuclear Deal?
By Jake Godin
By Jake Godin
May 8, 2018
President Donald Trump says he's pulling out of the Iran nuclear deal. So, what happens next?
SHOW TRANSCRIPT

"The United States will withdraw from the Iran nuclear deal," Trump said.

This is despite U.S. allies' best efforts to convince Trump otherwise.

"There is an existing framework to control the nuclear activity of Iran. We signed it, both the United States and France, that is why we cannot say we should get rid of it like that," French President Emmanuel Macron told a joint session of Congress.

So what happens now that Trump has left the deal?

First, the damaging U.S. economic sanctions on Iran will, over time, snap back into place. It's possible Iran will try to convince other countries not to ignore these. After that, some speculate we could see more Iranian-sponsored cyberattacks against U.S. companies.

"Cyberwarfare, the most extensive attacks on America's banks ever, launched from the Middle East, happening right now," George Stephanopoulos said in a 2012 broadcast.

Or, Iran might abandon the restrictions on its nuclear program and trigger an arms race in the Middle East by rushing to get the bomb. 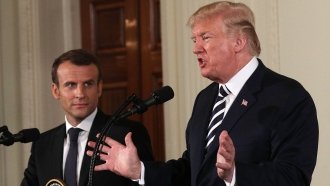 The deal was inked in 2015 among the U.S., the United Kingdom, France, Russia, China, Germany and Iran as a way to monitor Iran's nuclear program and keep it from developing atomic weapons.

But Trump, and others, don't like the deal because of what it doesn't do. It doesn't address Iran's ballistic missile program or the country's support for armed groups in places like Yemen or Syria. And the agreement includes "sunset clauses," which let some parts eventually expire.

Those who support sticking with the pact say after months of exhaustive negotiations, this was as good as it was going to get.

Now that he's pulled the plug on his predecessor's version of the deal, the big question is, can Trump actually get a better one?