What Happens If The Entertainment Industry Leaves Georgia? 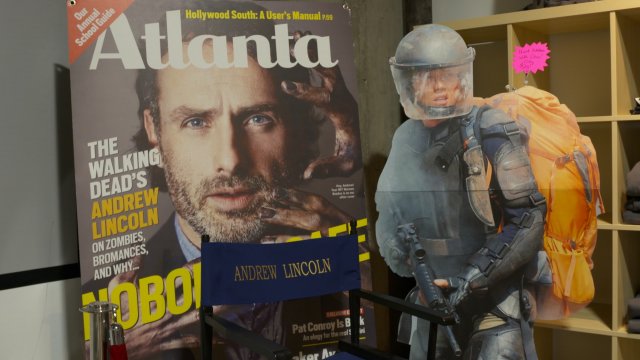 Georgia's controversial abortion law is threatening the state's relationship with the entertainment industry.

"Y'know, the industry was really getting off as far as the tax incentives. So, when I first started here, it was, it was easy. It was a no brainer for me to move here. I just had to talk my wife and my family into leaving Los Angeles to come to Georgia."

"I have so many friends that really depend on, y'know, moviemaking here. There's a lot of people that have invested time, like I said, time and their efforts of, y'know, learning a trade. If it goes away, they have to find work somewhere else."

Georgia is home to Eric Bates, a veteran props master whose most recent work includes "Ozark," "Game Night," and the upcoming HBO miniseries "The Outsider." All these were filmed in the state along with hundreds of other productions that choose to benefit from the best tax incentive in the country, one of the fastest-growing entertainment infrastructures in the world and thousands of workers like Bates who've now settled in the state.

"I've been asked to go to New York. But I don't need to. I can stay right here in this great state."

For more than a decade, both the state and the industry benefited from a strong partnership brokered through a 2008 tax credit. But since the passing of a controversial law banning abortions once a fetal heartbeat is detected, that partnership is showing some signs of fatigue.

Netflix was the first major Hollywood studio to speak out against Georgia's abortion law, saying it would "rethink [its] entire investment" in the state. Immediately after, Disney, WarnerMedia, NBCUniversal, CBS and Sony released their own similar statements — calling into question what happens next to Georgia’s film workers, local businesses and the industry overall.

To answer those questions, let's look at what happened when the industry left another state: North Carolina.

"I am from Wilmington, North Carolina. So I saw the industry kind of exit that town. And I know, I know what that feels like."

For years, North Carolina was a major hub for the entertainment industry — home to blockbusters like "Iron Man 3" and even the Oscar award-winning "Three Billboards Outside Ebbing, Missouri." At its peak in 2012, North Carolina saw $340 million in movie and television spending, but in 2016, that number dropped to $35 million. Recent years do show the industry picking back up, but it's unclear if that'll continue.

So, what happened? Two things. In 2013, North Carolina began cutting its tax incentives and changed the tax credit to a more limited grant program in 2015. A year later, the state passed parts of what's famously known as "the bathroom bill. — preventing local governments from passing policies that would protect LGBTQ people until 2020.

Companies like Netflix and Hulu decided to pull out of the state following the news, choosing to film in South Carolina and Canada respectively instead. Netflix was projected to spend around $60 million on an upcoming series it planned to film in the state.

"A lot of people left. A lot of people came here — to New Orleans, really, first — and then to Georgia. The city is still going on. I mean, it's still a city and it's still, y'know, a college town. And, like I said, they do still film there. But, it's not...it's not like it was."

What happened in North Carolina also played out in Louisiana, Florida and other states in the region. One outlet estimates that in just the last four years, Florida lost 87,000 industry jobs and one billion dollars in lost business.

Right now, Georgia's film industry is the largest by far — in 2017, it was responsible for more than 92,000 jobs and nearly five billion dollars in total wages. But following the threats of a Hollywood boycott, film workers in the state are worried they could suffer the same fate.

Beyond people that work in film and television, some local business owners say they don't want the industry to go either.

"It is a little bit frightening to think that they may leave our state. We would hate for that to happen, especially because not everyone agrees with a bill that is being passed … I appreciate the impact that they're trying to cause and the statement that they're bringing, but I just hope that we can come to some kind of agreement that everyone can win."

"The jobs are here. And if that goes away, then they go away. And they take with it a lot of infrastructure that has built up around it. There's catering and craft services, there's nanny and, y'know, daycare services. There's so many small businesses around film that would be gone."

Many of the larger studios in the state — including Pinewood Studios and Tyler Perry Studios — have stayed silent on the issue. Newsy reached out to the heads of both companies, but neither were available for comment.

The answer to that question is still up in the air. Advocates like former candidate for Georgia governor Stacey Abrams traveled to Hollywood to ask industry executives to consider the economic consequences of a boycott on the people whose livelihoods depend on the industry.

"What's unstable is the political part of it. It's hearsay, it's what could be, it's what might be, it's a...y'know—right now, I'm working.""Good night, Georgia! We'll see you tomorrow."