What Happened While Freddie Gray Was In Police Custody? 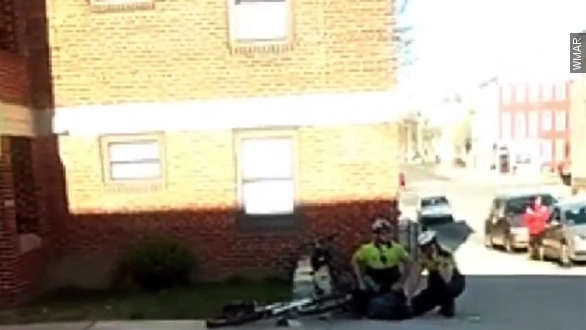 "Those officers immediately need to be arrested and charged. You're dealing with murder," one protester told our partners at WMAR.

We know that 27-year-old Freddie Gray died Sunday after a police encounter left him with severe injuries to his spine. You can see him here as officers put him into a police van while he screams.

"This is a very serious incident that we are looking at thoroughly," said Baltimore Police Department Deputy Commissioner Jerry Rodriguez.

"We will hold the right people are held accountable," Mayor Stephanie Rawlings-Blake said at a press conference.

The questions we still don't have the answers to are big ones: Why Baltimore police stopped him in the first place, and what they did to restrain him.

- Officers tried stopping Gray last Sunday morning in an area police say has "a history of drug dealing and violence."

- Around 15 minutes after they caught, arrested and put him in a police van, they had to stop to restrain him.

- Half an hour later, paramedics then transferred 27-year-old Gray to a local hospital, where he remained in a coma until his death Sunday morning.

"We have no confidence that the investigation is going to reveal the truth."

William Murphy, the Gray family's attorney, believes the police are withholding those important details to give themselves time to come up with a story. (Video via NBC)

Murphy says Gray's spine was 80 percent severed in the neck area and his voice box partially crushed by the time he was taken to the hospital.

The Baltimore Police Department has its own video footage, which it hasn't yet released. The department is investigating, but in the meantime, protests are planned Monday morning to demand answers.

Separately, the Department of Justice has been probing the department over allegations of police brutality and harassment. That review was previously requested by the city's mayor and police commissioner.