What Happened To The Artifacts Inside Notre Dame? 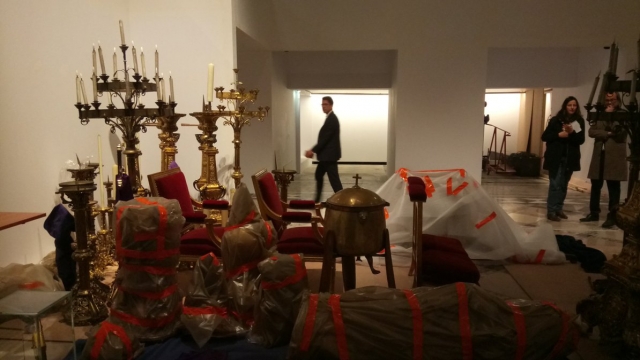 Once crews were able to contain the fire at Notre Dame Cathedral in Paris, thoughts turned to what happened to the priceless artifacts and relics inside the historic building. That includes the Crown of Thorns.

That crown was saved. The cathedral called it the "most precious and most venerated relic." It's purported to have been worn by Jesus during his crucifixion. A nail believed to be used during his crucification was also saved.

The tunic of Saint Louis, another item considered one of the "most precious treasures" from Notre Dame, was spared as well. It's believed to be worn by King Louis IX, the only French king to become a saint.

As for the three intricate stained-glass rose windows, which date back to the 13th century...it appears that they too were unharmed by the flames.

But it's unclear how other historic items fared in the fire. France’s culture minister says it appears some of the large paintings were not burned, but could have water damage.

He says the cathedral's more-than-800-year-old organ appears to be "quite affected." Like the paintings, multiple outlets report the organ didn't face fire damage but could have water damage.

It appears luck and good timing could be factors as well. Days before the fire, crews removed more than a dozen historical statues from the top of the cathedral while the spire underwent renovations. The spire was destroyed in the fire.