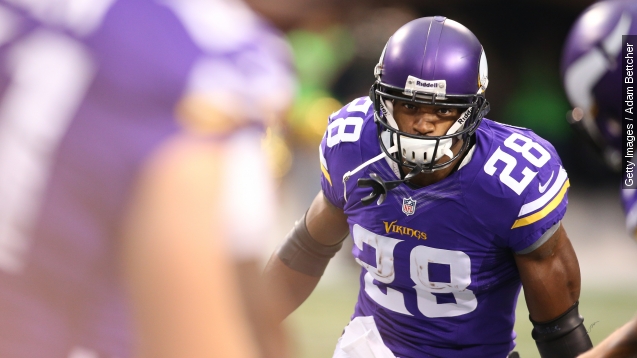 It's no secret running back Adrian Peterson and the Minnesota Vikings have bumped heads over his contract recently, and Thursday another layer was added to the saga.

The former NFL MVP went on a pretty epic rant on Twitter, venting his frustrations. We're not exactly sure what about but it seemed to do with either his current Vikings deal, how the league handles contracts in general or, perhaps, both.

One of those tweets reads: "A lill crazy how one side has so much power that they can do as they please when it come to the contract!"

Peterson's Twitter tirade comes just a day after Vikings head coach Mike Zimmer laid out an ultimatum for the 30-year-old star running back.

"Adrian, he's really got two choices. He can either play for us or he can not play. So he's not going to play for anybody else. That's just the way it's going to be," Zimmer said.

Those comments were made the same day Peterson skipped out on off-season team training sessions, which, according to ESPN's Josina Anderson, he says 'has nothing to do with wanting to be traded. It's about securing my future with the Vikings. It's business, not personal and I understand that firsthand. Go Vikings.' (Video via Nike)

Given that statement, it's a little unclear what exactly Peterson was trying to accomplish by airing his grievances Thursday.

He's set to make $12.75 million this upcoming season with the Vikings and that figure increases in 2016 and 2017, though it's not guaranteed money — meaning the Vikings could theoretically cut him if they please. He doesn't have that same power, which appears to be his beef. (Video via Castrol)

But sports writers for USA Today and Yahoo point out Peterson pretty much has no "leverage" in this arrangement, because he signed the contract including those stipulations — and speaking up won't really do him any good.

"Plenty of guys have wanted out before. Teams do not typically let them out. It sets a bad precedent. And attacking the system generally doesn't seem to be the best way for Adrian Peterson to try to turn the tables on the Vikings," NBC Sports writer Mike Florio said.

Peterson was placed on the commissioner's exempt list in 2014 after allegations of child abuse became public. He missed all but one game last season. (Video via WCCO)