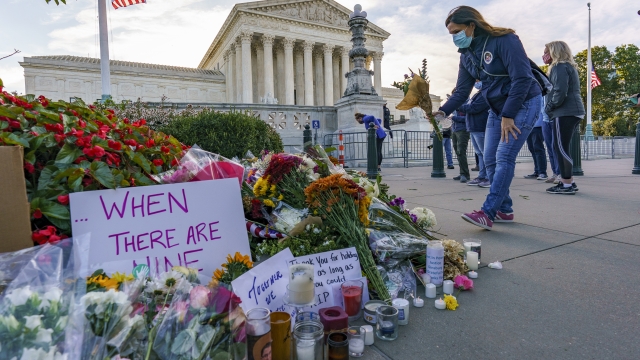 SMS
What Ginsburg's Death Could Mean For Abortion Access In U.S.
By Austin Landis
By Austin Landis
September 19, 2020
Justice Ruth Bader Ginsburg has been key in upholding Roe V. Wade through its many challenges.
SHOW TRANSCRIPT

Here's what Ginsburg's death could mean for abortion access across the U.S.

She's been key in upholding Roe V. Wade through its many challenges.

Recently, restrictions on abortion access have worked their way to the court.

Just this June, the Supreme Court struck down a Louisiana law that would leave the state with only one abortion clinic.

At a debate in 2016, Trump pledged to appoint justices who would overturn Roe V. Wade.

And on a court that already leans conservative, the addition of another justice could be the tipping point.

It would most likely give individual states a path to restrict or issue bans on abortion.

In a recent CBS News poll, 63% said keep Roe V. Wade as it is, including some Republicans.

And according to the Pew Research Center, 61% think abortion should be legal in all or most cases.