What Do Ginni Thomas' Texts Mean For Justice Clarence Thomas? 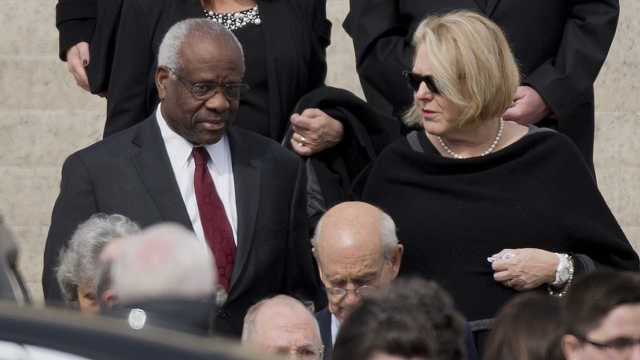 In the days following the 2020 election, Ginni Thomas, a conservative activist and the wife of Supreme Court Justice Clarence Thomas, sent numerous texts to Donald Trump’s chief of staff Mark Meadows. Her goal was to get Meadows to try to overturn the 2020 election.

The texts from Thomas to Meadows, obtained by the Washington Post, are urgent and full of misinformation.

Thomas tells Meadows, “Help This Great President stand firm, Mark!!!” and “Biden and the Left is attempting the greatest Heist of our History.”

But were these messages enough to prompt Justice Clarence Thomas to recuse himself from future cases involving the election before the high court?

“No, I think Justice Thomas can make his decisions like he's made them every other time," said House Minority Leader Rep. Kevin McCarthy.

Rep. McCarthy weighed in on the issue during a press conference in Florida.

“It's his decision based upon law," Rep. McCarthy said. "If you spent any time studying the Supreme Court Justice, he's one who studies correctly, and I mean, from all the way through, if he sees it's not upholding the Constitution he'll rule against it, if it's the Constitution, that's what his job should be, It's him.”

On the other side of the aisle, some Democratic lawmakers are calling for more than a recusal. Rep. Ilhan Omar said the longest serving justice on the country’s highest court should be impeached.

“The Supreme Court, and the judiciary, generally relies on its legitimacy as its strength," she said.

She says the bigger issue here isn’t the individual decisions but instead the legitimacy of the court.

“Why are they obeyed by you know, the executive and Congress and so on? Because they're seen as authorized by the Constitution and having the legitimacy of the government behind them, but they can't enforce their own decisions,” Jacobi said.

There is some general guidance for U.S. judges that covers recusal and disqualification.

The code of conduct for U.S. judges says a judge must “disqualify himself or herself in a proceeding in which the judge’s impartiality might reasonably be questioned.” That includes instances where a judge’s spouse could be “substantially affected by the outcome of the proceeding.”

That said, unlike most federal judges, the Supreme Court doesn’t have a higher body to supersede its decisions. It puts Justice Thomas in a unique position.

The 29 messages between Ginni Thomas and Mark Meadows do not directly reference Justice Clarence Thomas or the Supreme Court. Ginni Thomas has also said in the past she does not discuss her work with her husband.