What Exactly Is A 'Safe Third Country' Agreement? 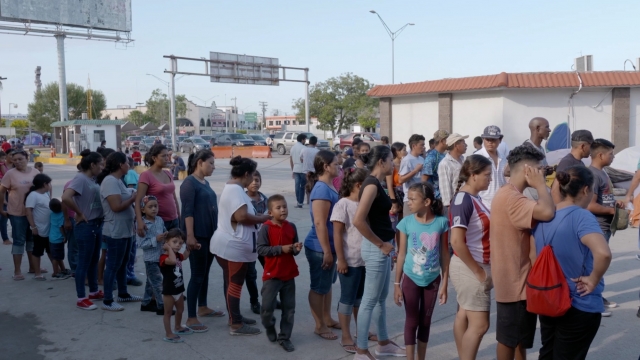 SMS
What Exactly Is A 'Safe Third Country' Agreement?
By LeeAnne Lowry
By LeeAnne Lowry
November 23, 2019
For one thing, a safe third country must give asylum seekers access to basic social services.
SHOW TRANSCRIPT

Last week, some asylum-seekers who arrived at the U.S.-Mexico border were sent to Guatemala because they had passed through it on the way to the U.S.

That happened under a so-called "safe third country" agreement that the U.S. recently entered with Guatemala. This kind of deal isn't explicitly provided for in international law, but it also isn't not provided for.

The U.N.'s 1951 Refugee Convention says a migrant shouldn't be punished for entering a country illegally if they're arriving directly from a country where they were under threat.

That's been broadly interpreted to mean that if a migrant passes through what can be considered a "safe" country, other countries don't have to consider their asylum claim. And the U.N. says that's OK, in certain circumstances. The UNHCR says "burden-sharing" arrangements are "reasonable", as long as they prioritize the refugee's protection.

That's where things get controversial: What should be considered a "safe" third country? The UNHCR defines it as a place where "refugees can enjoy asylum without any danger." They have to be safe from being sent back to their home country and they must have access to basic social services like health care, education and employment.

The deal's critics argue Guatemala doesn't fit the criteria. For one thing, more than half of Guatemala's population lives in poverty, and it has the highest rate of child malnutrition in Central America. The Migration Policy Institute has called the country's asylum system "embryonic."

That's not to mention that Guatemala didn't want to sign the deal. The U.S. threatened to impose sanctions if it didn't agree.

As for how the deal will work in practice: It's hard to say. That's because there isn't a whole lot of precedent.

The U.S. and Canada have had a safe third country agreement since 2002. It operates on the assumption that both countries will welcome refugees and that people should seek asylum wherever they arrive first. But because of recent changes in U.S. immigration policy, groups including Amnesty International Canada are urging Canada to leave the agreement. The U.S. has also signed deals with El Salvador and Honduras, but they haven't gone into effect yet.

Former Acting Secretary of Homeland Security Kevin McAleenan defended the agreements in July. He said U.S. immigration judges reject most Central American migrants, so it's better for them to seek asylum earlier in their journeys rather than making the long, dangerous trek to the U.S.