What A Bird's-Eye View Can Tell Us About Flood Devastation 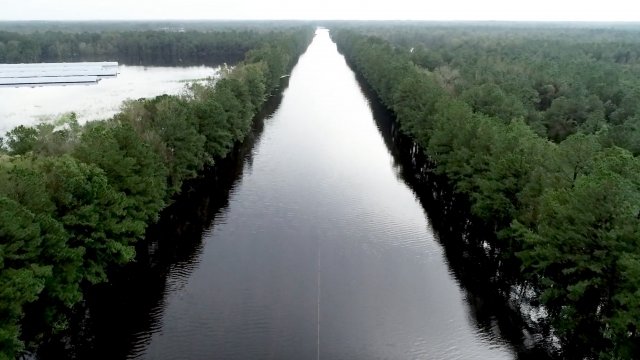 By Christian Bryant
September 28, 2018
Images of a submerged North Carolina highway, captured by a drone pilot, put the state's flooding in perspective and helped with the recovery effort.
SHOW TRANSCRIPT

You wouldn't know it right away, but this is the longest interstate in North Carolina — hidden by floodwaters from Hurricane Florence.

"There was actually a Snopes article because folks didn't believe it was true. We said, 'This is not a river, this is a highway.'"

"That particular photo and video that went nationwide and got lots of attention was taken from a drone.

"That really told a story that we haven't been able to tell in the past because from the ground it looks one way. Really high up from an aircraft or a satellite photo, it looks definitely different. This is a really unique view that we're getting 100-200 feet off the ground.

"It just illustrated why we had these roads closed and why these detours were so important. We didn't want folks driving through that water."

And for good reason. In North Carolina, Hurricane Florence has claimed at least 37 lives, and according to the state's governor:

"Motor vehicles drownings are the leading cause of death from Florence."

North Carolina has a long history with aviation technology. Kitty Hawk, near the state's coast, is where the Wright brothers tested the first successful airplane. NCDOT's UAS program could be seen as an extension of that legacy.

There isn't anything really special about this technology — the drones used by the state's Department of Transportation are the same drones any hobbyist can buy with $1,500.

But the difference is how these drones are being used.

"What we're looking for in this particular video is how far is traffic backing up.

"This gave us some good information and allowed us to make the appropriate decisions on expediting downstream all of those traffic lights and how they moved folks through this particular detour."