What Does Google Want With Moffett Federal Airfield? 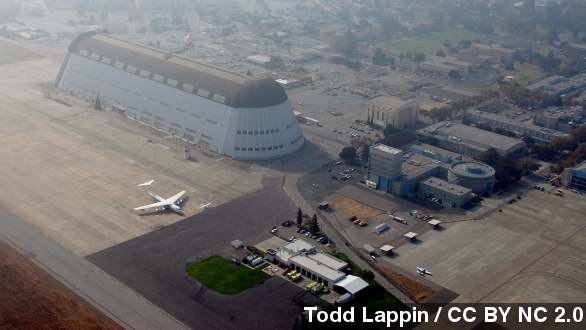 Google-owned Planetary Ventures, LLC signed a $1.16 billion lease for Moffett Federal Airfield where the behemoth, eight-acre Hangar One resides. Planetary Ventures says it will work to restore the historic structure and offload about "$6.3 million annually in maintenance and operation costs."

NASA Administrator Charles Bolden explained the cost-saving move: "As NASA expands its presence in space, we are making strides to reduce our footprint here on Earth."

Sure, sure, saving millions of dollars is great, but the real question is what the heck Google wants with an airfield.

According to the press release, Planetary Ventures will use the space for "research, development, assembly and testing in the areas of space exploration, aviation, rover/robotics and other emerging technologies." Huh, sounds a bit like NASA.

And when news of the proposed deal began cropping up in February, Silicon Valley Business Journal quoted one community activist who said the deal amounted to some level of charity, because "recovering that hangar is probably a money-losing deal."

But while it's safe to say there's a bit of charity involved, the outlet noted location likely played a role in Google's bid to lease the airfield, as Hangar One is a mere three-mile drive from Google's Headquarters.

And Fortune reports Google had a deal in the works to build an office complex "on 42 acres at Moffett Field." Now it's got access to a whole lot more.

A bit strategic, a bit charitable — now that sounds like Google.

NASA will maintain ownership of the facility. As part of its planned improvements for the airfield, Google says it will create an educational facility for the public to "explore the site's legacy and the role of technology in the history of Silicon Valley."

This video includes images from NASA Ames Research Center and Scott Ashkenaz / CC BY NC ND 2.0, and music from Kevin MacLeod / CC BY 3.0.