What Does Black Lives Matter Expect From A Biden Presidency? 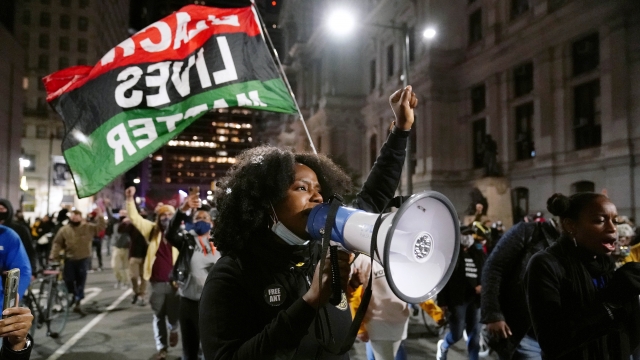 SMS
What Does Black Lives Matter Expect From A Biden Presidency?
By Jamal Andress
By Jamal Andress
November 8, 2020
The Biden-Harris campaign has roundly rejected the idea of "defund the police," instead pushing for incremental police reform measures.
SHOW TRANSCRIPT

"When this campaign was at its lowest, the African American community stood up again for me," said President-elect Joe Biden. "You've always had my back, and I'll have yours."

President-elect Joe Biden specifically thanked Black Americans during his victory speech in Wilmington, Delaware Saturday night for helping propel him to the White House. He won about 87 percent of the Black vote according to exit polls.

But what exactly does Joe Biden plan to do for Black Americans once in office?

A close second is racial justice — an issue the Biden-Harris campaign, and the country, has focused on for months.

"I never had to tell my daughter if she's pulled over make sure, for a traffic stop, put both hands on top of the wheel and don't reach for the glove box because someone may shoot you," said Biden "The fact of the matter is, there is institutional racism in America."

The solutions around racial justice and policing are splintered among activists and Black Americans more generally.

Civil rights attorney Ben Crump has called for the passing of the "George Floyd Justice in Policing Act" which bans chokeholds and no knock warrants, ends qualified immunity for police and creates a nationwide use of force standard among other things.

This is a measure that Vice President-elect Kamala Harris has lobbied for and supports.

"The question asked if there is police misconduct and excessive force is to ask of that use of force, was it reasonable," said President-elect Kamala Harris. "Well as we all know we can reason away just about anything. The appropriate and fair question to ask is `was it necessary?'"

But one step some activists have called for that has been roundly rejected by the Biden-Harris campaign is an effort to “defund the police.” — which means diverting some of the spending for law enforcement to social services.

"Why would we keep putting taxpayers' hard earned dollars into a failing system, when we could actually put it into a useful and solution airy system that is good for everybody?" asked activist Ash-Lee Henderson.

Ash-Lee Henderson is an activist from "The Movement for Black Lives" who worked with US Representatives Ayanna Pressley and Rashida Tlaib on legislation that uses federal dollars to reward cities and counties that defund their police departments.

When asked about President-elect Biden's opposition to defunding police, Henderson says her response doesn't change no matter who's in office.

While President-elect Biden hasn't been in support of defunding measures for law enforcement, he has expressed his support for funding a partnership between law enforcement and social workers to handle mental health emergencies.