What Do Your Emojis Really Mean? 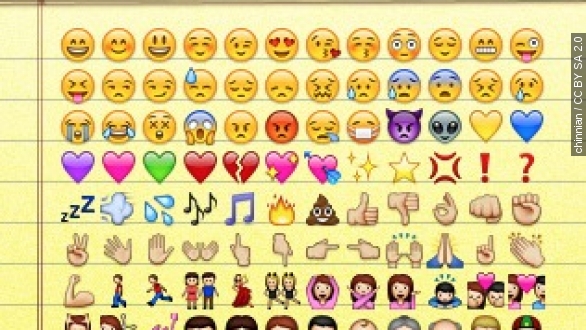 Emojis are so often used now, it's almost strange to receive a text message without one. But what are we really saying when we use emojis?

To help us out, an engineering team at Instagram decided to delve into the emoji world and looked at some of the most commonly used emoticons.

Perhaps unsurprisingly, the most-used emoji is the tears-of-joy face. According to an algorithm Instagram created, it can stand for lolol, lmao, lolz and lml.

Interestingly, the just straight crying face only ranked as the 11th most-used, standing for ughh, omgg and xc — whatever that means.

The second most-popular emoji is the heart-shaped-eyes face. It can stand for "gorgeous," "goregous" or "gorgous." Apparently "gorgeous" is a really hard word to spell.

But what about character emojis, like the dancing girls? Instagram found that emoji means #sistersforlife, #sisterfromanothermister or #bestiesfortheresties.

The hands-in-the-air emoji is a bit more confusing, standing for anything from #waitonit to #thatisall.

Instagram reported it was hard to determine exactly what the different colored hearts meant, figuring out most times people use them to associate with a specific team — like a blue heart for the Denver Broncos — or holiday, like a green one for St. Patrick's Day.

Of course, as one researcher pointed out in a recent study of emojis, "They can have different meanings depending on the situation, and the mood or the person for whom the message is intended."

That study found the meaning of emojis used in a text were much easier to decipher when words were used as well.

For example, when the Twitter accout Emojibama tweeted out parts of the president's State of the Union address this year, it was pretty easy to decipher that this tweet meant: "My fellow Americans, we, too, are a strong, tight-knit family. We, too, have made it through some hard times."

Whereas, this tweet is way harder to figure out since it utilizes so few words.

Although some of these might get lost in translation, I think we can all agree the bacon emoji is universal.