What Do Improved U.S.-Cuba Ties Mean For Russia? 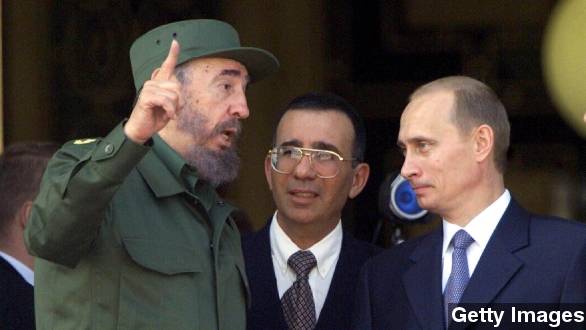 President Kennedy said, "It shall be the policy of this nation to regard any nuclear missile launched from Cuba against any nation in the Western Hemisphere as an attack by the Soviet Union on the United States, requiring a full retaliatory response upon the Soviet Union."

The Cuban Missile Crisis represented not only the most visible moment in the history of U.S.-Cuba relations, but also in Cuba's relationship with Russia, which would ultimately outlive the U.S.S.R. itself. (Video via PBS)

President Obama said Wednesday, "Today, the United States of America is changing its relationship with the people of Cuba."

That relationship could be set to change in a big way with diplomatic relations between the U.S. and Cuba seemingly on the horizon.

But it's not clear just yet exactly what this new relationship means for the decades-old alliance.

Cuba suffered one of its worst economic depressions after the fall of the Soviet Union in 1989, and it took the country years to recover from the food and power shortages it saw during what it came to call the "Special Period." (Video via Arthur Morgan Institute for Community Solutions)

Since then both Russia and Cuba have actively pursued diplomatic ties. Vladimir Putin made the island his first stop on this summer's Latin American tour and forgave some $32 billion Cuba owed the Soviet Union. (Video via RT)

In exchange? Well the same thing Cuba's always given Russia: strategic access to the U.S. Namely, a former Soviet base at Lourdes, southwest of Havana. (Video via Google Earth)

At least that's what a Russian newspaper reported in July — that Russia would be reopening a Soviet-era base that was used to spy on the U.S. — and it didn't take long for a story that juicy to get picked up by international outlets.

The Kremlin naturally denied the story, which coincided with worsening relations between the U.S. and Russia. Instead it focused on its business ties with Cuba.

In fact, there were actually Russian officials in Havana just ahead of President Obama's announcement this week, including Russia's deputy prime minister, who is on a tour of Latin America. (Video via Russia 24)

One effect the possibility of an improved U.S.-Cuba relationship has already had? Sparking speculation about the U.S.'s intentions. (Video via The White House)

An analyst for Russian state-sponsored outlet RT writes the U.S. might be trying to further isolate Russia "in a way that America is trying to move away as many allies of Russia as it possibly can."

And that's a popular view — it's no coincidence that the Russian deputy prime minister is also visiting Venezuela, another traditional Cuban ally hurt by both the fall in oil prices and recent U.S. sanctions. (Video via Press TV)