What Did Einstein Mean By 'Curved' Spacetime? 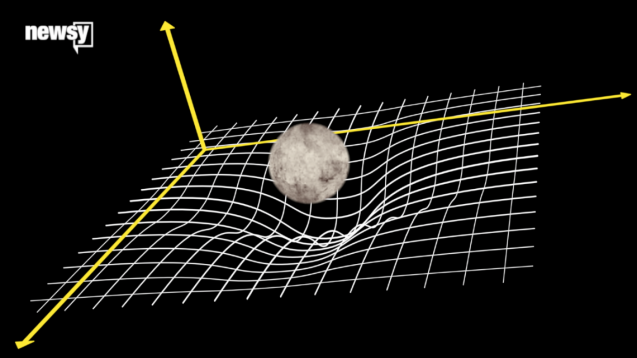 We asked two physicists to walk us through one of the basic principles in Einstein's general theory of relativity.

One of Albert Einstein's most important insights is that empty space can be curved and what we call gravity is really just a consequence of those curves.

That's not an easy concept to grasp, so scientists use all kinds of analogies to help explain it. (Video via PBS, YouTube / MegaGreenLucas)

The most common is probably the grid dipping under a planet, star or galaxy. We asked two physicists to walk us through the concept.

Angela Speck, head of astronomy at the University of Missouri, says: "It's really about how light in space behaves. ... Up until Einstein came along, we had a way of thinking about what space was, what mass was. That was very different. ... Usually we think of space as just being this empty thing. We think of it as, if you've got light traveling, it travels like a laser. It travels in a completely straight line." (Video via NASA)

It's only when using very precise equipment, like the Hubble telescope, that it becomes obvious that isn't true. We can see that if light had to pass close to something massive on its way to Earth, it arrives at a weird angle. (Video via NASA)

University of Missouri physicist Sergei Kopeikin says, "So light rays are not propagating already along straight lines; they are propagating along curved lines."

This is one of the major predictions of relativity: that matter curves spacetime and that we can see that curvature simply by observing how light gets to Earth. (Video via European Southern Observatory)

"It follows what space does, so if space curves, then light is going to curve," Speck said.

"When you take a particle which has mass and put it to spacetime, then the particle actually distorts the geometry of spacetime which becomes not flat ... but curved. ... And this is the curvature of spacetime," Kopeikin said.

That's what the bent grid, or so-called "trampoline," is meant to illustrate, helping us get our heads around how space curves in the presence of matter.

"The trampoline seems to be very successful in helping people to kind of get this idea," Speck said.

"If you take a big sheet of rubber and put on that rubber some heavy body, it will make that rubber kind of curved," Kopeikin said.

"And now you start rolling marbles across it. You can get them to go all the way across, but they'll bend as they get close to … that dip in the trampoline," Speck said.

"This is what happens in the real world. ... So this is how we can trace the presence of curvature in the experiments via the light rays," Kopeikin said.

Unfortunately, the trampoline analogy only goes so far because the universe isn't two-dimensional. But it's a good starting point.

"But then you have to translate it into 3-D space. … When you try to conceive of that in three dimensions, it just messes with your head completely," Speck said.

This video includes images from the Library of Congress and NASA.