What Can Governors Do To Block Syrian Refugees? Not Much 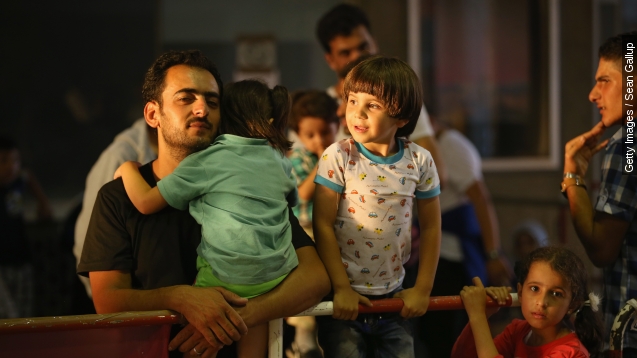 More than a dozen governors from across the country have released statements saying they won't accept Syrian refugees. The thing is, it's not really up to them.

Refugee resettlement is handled by the federal government, which determines how many refugees will be admitted and from where.

When it comes to finding housing for those refugees, that's handled by voluntary agencies, which receive funding from the Department of State or are self-funded. (Video via Catholic Community Services of Utah)

In fact, if governors try to stop refugee settlement, either by trying to block their admission into the state or blocking their housing, that could violate the 14th Amendment as well as a mountain of legal precedents and Supreme Court rulings, according to University of Connecticut law professor Jon Bauer.

Governors can lobby members of Congress to enact legislation to limit or stop the admission of Syrian refugees, and Sen. Rand Paul has already introduced a bill that would do that. (Video via The White House, Office of Sen. Rand Paul)

But it's unlikely such a bill would make it through both houses of Congress, and even more unlikely it would have the support needed to override a probable presidential veto.

The governors and Sen. Paul have said they think the refugees could pose a security threat and need to be screened more thoroughly. (Video via Radio Free Europe / Radio Liberty)

The U.S. already has one of the strictest screening processes for asylum-seekers in the world; the process can take 18 to 24 months to complete. (Video via U.S. Department of State)

"If we have no information on someone, they've never crossed our radar screen, never been a ripple in the pond, there will be no record of them there. It will be challenging," Comey said.

But that's hardly unique to Syrian refugees. In fiscal year 2014, the U.S. accepted 9,000 refugees from another war-torn country with an active terror group: Somalia.