What Came Out Of Sierra Leone's Weekend Ebola Lockdown? 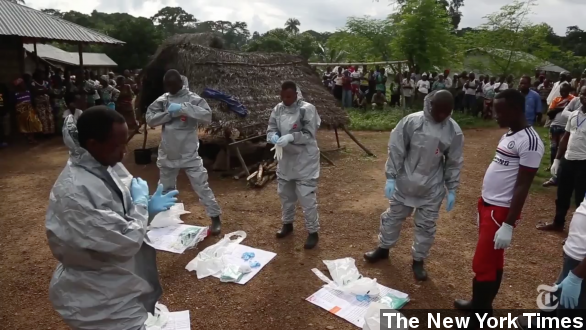 SMS
What Came Out Of Sierra Leone's Weekend Ebola Lockdown?

By Sebastian Martinez
September 22, 2014
Sierra Leone's weekend "crackdown" to prevent the spread of Ebola in the country is over. So how did it go?
SHOW TRANSCRIPT

Sierra Leone's three-day lockdown to combat Ebola is over.

The weekend lockdown is the most drastic action any of the Ebola-affected countries has taken so far, and officials there have declared it a success. (Video via CBS)

Starting Friday, the government asked people to not leave their homes, as aid workers — the BBC reports 30,000 in all — went door to door to educate people, as well as identify and treat patients. (Video via BBC)

Officials were reluctant to call it a lockdown, instead saying:

As far as the numbers go, multiple outlets report authorities recovered more than 90 bodies over the weekend, with 123 people using the government hotline to contact the authorities. Around half of those callers tested positive for the virus. (Video via Press TV)

Cataloging those who might be infected or have come in contact with an infected person is known as contact tracing, and it's one of the most important parts in containing the outbreak. It has also proved one of the most difficult, as one CDC worker told CNN.

REBECCA LEVINE VIA CNN: "We are not going to stop an outbreak if the contact tracing is not happening. It presents a whole new set of challenges. It's definitely an urgent, urgent problem."

Despite fears of violence, there was reportedly only one such incident, when a burial team was attacked — but no one was reported harmed, and the team was able to resume its work later with the help of police.

Burial teams have faced the brunt of the pushback as health workers try to prevent traditional burial ceremonies that would bring people in close contact with the dead and expose them to infection. (Video via The New York Times)

The World Health Organization reports at least 5,500 cases of the virus across West Africa and more than 2,500 deaths. More than 500 of the deaths have come from Sierra Leone.