What Are Team USA's Chances Of Advancing In The World Cup? 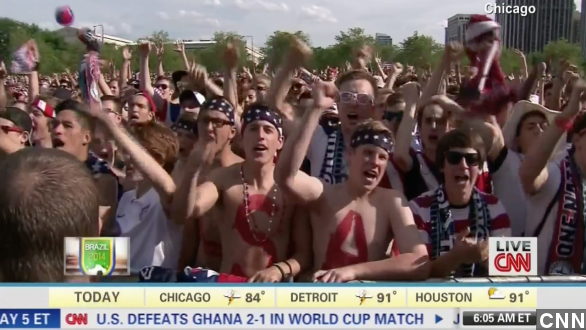 SMS
What Are Team USA's Chances Of Advancing In The World Cup?

By Matt Picht
June 22, 2014
After their 2-2 draw with Portugal in the World Cup, what does Team U.S.A. need to do to make it to the next round?
SHOW TRANSCRIPT

With a desperate header in the absolute last minute of play, Portugal's Silvestre Varela simultaneously kept his country alive and dashed U.S. hopes of an easy escape from the World Cup's so-called Group of Death. (Via Wikimedia Commons / Fanny Schertzer, Deadspin)

Had the U.S. won Sunday's match, they would have clinched a spot in the tournament's 16-team knockout round. But the 2-2 tie with Portugal means Team U.S.A.'s World Cup future is a little more uncertain.

Here's how it works: only two teams out of each group can advance to the next round, and FIFA decides who gets to stay in based on a points system. Victories are worth three points, losses none, and a tie gives one point to each side.

In Group G — the Group of Death — the U.S. and Germany are in the two top slots with four points, both teams having scored one triumphant victory and one frustrating tie. Ghana and Portugal, meanwhile, each have one point.

So how does the U.S. advance now? Well, the surest way would be for the team to beat Germany when the two teams meet on June 26. But don't hold your breath — Germany is ranked as the second-best team in the world, as evidenced last week when they crushed Portugal 4-0.

So Team U.S.A. might have to settle for four points at the end of group play. That might still be enough to advance, but it all depends on what happens in the group's final match — Portugal vs. Ghana.

An outright win by either side would take their score up to four points and tie things up with America. And FIFA breaks those ties primarily by counting up the goal difference — how many goals each team scored, minus how many they allowed.

This opens up a golden opportunity for Ghana's Black Stars, which have a -1 goal difference to the U.S.'s +1. So if Ghana can win their next match by two or more points, they'll pass the U.S. and move on to the knockout round.

As for Portugal, well, they're sitting on a goal difference of -4. So currently they'd need to beat Ghana by 5 points to move on — which isn't impossible, but it's a very long shot. (Via Twitter / @TheWorldCup, @StrictlySoccer)