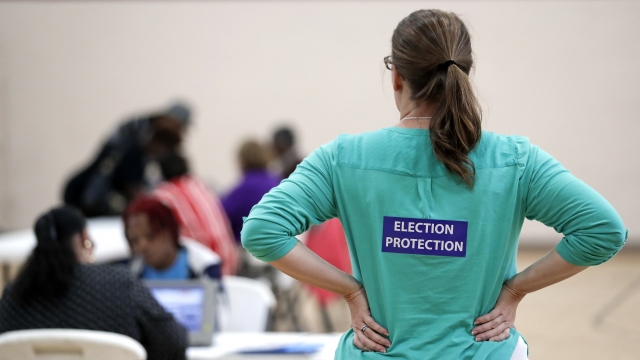 "Be poll watchers when you go there. Watch all the thieving and stealing and robbing they do. Because this is important," President Donald Trump said last month at a campaign rally in North Carolina.

"Go into the polls and watch very carefully because that's what has to happen," the president said at the first presidential debate in Cleveland.

President Trump has called on citizens to independently monitor voting locations for instances of fraud, despite little historical evidence of it.

His suggestion has unnerved voting rights advocates and election officials, especially at a time of increased political violence, with clashes around the country between armed right- and left-wing groups.

"A lot of commissioners are concerned about their safety," Louisiana Secretary of State Kyle Ardoin, a Republican, said during a virtual event last month with the Georgetown University Law Center.

Official poll watchers exist — and most states allow political parties and campaigns to appoint them in advance of Election Day. Rules for what they can and can't do vary by state — but generally, poll watchers track turnout and ensure counting procedures are followed at polling sites.

"Poll watchers are a very specific entity that are determined a few days before Election Day and it's in specific predetermined polling locations," said Pennsylvania Lt. Gov. John Fetterman, a Democrat. "No one can just randomly show up and say, 'I'm a poll watcher.' That’s not how the process works."

But it's not these poll watchers that concern election officials. It's the self-appointed ones who might turn up at the polls unannounced and interfere with the voting process that have them worried.

"If someone is disrupting the process of voting, it is a prosecutable offense and we take it very seriously," Ardoin said.

Any conduct that intimidates or interferes with the voting process is illegal.

Last month in Virginia, some voters and polling staff say they were intimidated by Trump supporters who gathered during early voting at a polling place. (It's unclear if any laws were broken because the president's supporters stayed more than the required 40-foot distance from the polls.)

The incident, along with increasingly urgent messaging from the Trump campaign, has alarmed Democrats and some election officials.

"This is all about trying to dissuade people from voting because he's trying to con — to scare people into thinking that it's not going to be legitimate," Democratic nominee Joe Biden said late last month at the first presidential debate.

The Trump campaign has pushed back against claims it is engaging in voter suppression, arguing instead that an "army" of poll watchers is necessary to ensure all ballots are counted properly.

"When we are so polarized and we're so fractioned and we're so wanting to believe something bad is going to happen, we forget the very fundamentals of our elections and our democracy," Ardoin said during the event with Georgetown Law.